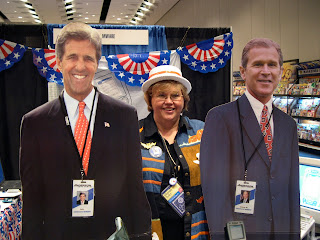 There is a new ritual at work now. Each day I get new goodbye emails. Some are from people I just bumped into once or twice and some, like one I got today, are from people who helped me grow as a person and not just as an employee.
Sharon Tyler (pictured above in 2004, flanked by "the candidates") was one of those people. When I hit the road and started visiting sites across the country as a trainer, I was pretty intimidated by the whole thing. The majority of the people we went out to train had been around for a lot longer than I had and many were skeptical about each new thing you brought to them. "Don't shoot the messenger" would have described how I felt over and over.
Sharon had the knack for training that I did not get with my education degree. She taught me to find the humor in it all and never take it personally when some people just couldn't be "reached". She always wanted the best for everyone around her (many times lobbying behind the scenes for improvements and changes) and worked many long and unrecognized hours.
And, she stayed self-motivated at all times no matter how crazy things were getting. That example is the greatest gift she gave to me.
My favorite memory was our dinner in Knoxville at P.F. Changs - right across the restaurant from Kurt Vonnegut (or, at least a guy that could be his twin).
Thank you, Sharon, for all of the good memories and lessons. I will not forget them.