I’m just kidding, I think. The music is so overwhelmingly loud in several parts of the movie The Social Network that entire sections of dialogue are almost completely drowned out. I think they did this so they could insert secret bits of information that only the younger folks who don’t yet suffer from age related hearing deficiencies could hear. So, it’s entirely possible that Justin Timberlake invented Facebook or that a transcript of the secret cure for the common cold was read. I’ll never know for sure. 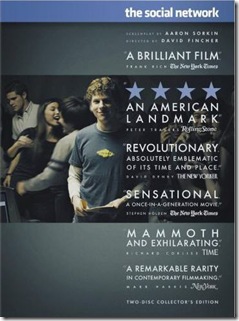 Something almost as annoying as the drowned out dialogue is the way the scenes jump back and forth. If you don’t have basic knowledge of the story behind Facebook, you’ll not really understand the way the movie suddenly jumps between two different depositions, the academic hearing, and the timeline of events that they attempt to bring everything together with. It is downright confusing for the first 30 minutes.

Aside from that, The Social Network was a pretty interesting movie. I’m not sure what my true take on Mark Zuckerberg is after seeing it. It could go either way. He might be a totally deceptive jerk or a genius or a little bit of both. It seems to take a little bit of both to get by in the world today and that’s why it’s hard to take sides based just on this movie. It was well worth my 99 cents at Redbox and my life-risking drive across town to get it.

In other news, the kids are out of school AGAIN tomorrow! We had just enough snow today and just enough freezing tonight to make for quite a mess out on the roads. I wonder if it will clear up enough for them to go back Thursday since it will only be 24 degrees tomorrow.

Oh, well. Soon it will be summer and I’ll be complaining because I have to mow.