My toes are frozen

I could post some pictures of the snow here but I didn’t take any. If it didn’t snow here all the time, it would be something interesting and different to share. Now, it’s now just a normal part of life – an extremely inconvenient normal part of life. The kids spent their 9th or 10th snow day (I can’t say for sure since I have now lost track) getting on each others nerves and driving me closer and closer to an early grave. Did I mention that it is supposed to snow again Sunday night?

I can only watch this video so many times to distract myself from my currently frozen toes. 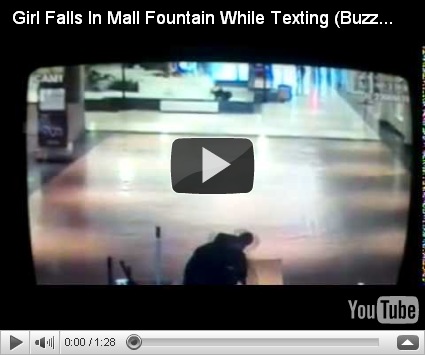 I keep turning up the heat and my toes are still cold. It must be part of aging.

I was quite happy to see all new television last night – Big Bang Theory, The Office, Parks and Recreation, and Outsourced. NBC tried a new show after Community (which I watch On Demand these days) called Perfect Couples that was absolutely horrible. I wonder if television executives are all high on glue? Who signs the deal to finance that sort of crap? I don’t want to waste $20 at Walmart and these nuts and spending thousands on a show that won’t last 3 weeks. Even worse, these “executives” must be surrounded by people just as enthusiastic about this sort of trash as they are!

The bright spot for me last night was the long overdue return of Parks and Recreation. P&R had a fairly weak first season but blew it out of the water last year only to be bumped from the fall schedule. It was worth the wait as they proved that they have not lost the momentum from being gone half the year (of course, these were filmed in the summer in anticipation of being on in September). One of the highlights for me was the Ron Swanson Pyramid of Greatness. I am so glad that NBC has posted a PDF of it here. Below is just a taste of the wisdom of the breakfast buffet lover that is Ron Swanson. 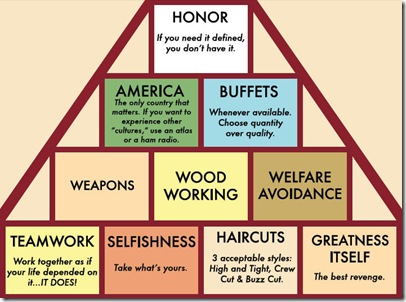 The weekend looms and with it comes the typical excitement – clothes to fold, a trip to Walmart, and, hopefully, some covered hash browns at the Waffle House. Ah, the joys of life in semi-rural America.