The weatherman serves up some warm humble pie

OK, so all of the build-up on television most of the night warning us that it was going to get a bit nasty out was right on-target.

10:25PM is about the time I got everyone in the hallway. Up until that point, I had been watching out the patio door and it was just a regular old thunderstorm. Sure, there was a tornado warning, but there always seems to be on these days. I’m watching the wind whipping up when the hail started and then the rain seemed to begin swirling and then there was virtually no visibility. The wind was howling and the last thing I saw before closing the door and forcing the kids out of bed was stuff that appeared to be flying over the top of the house.

I barely got everyone in the hallway before the wind died down again. The whole thing had to last only about a minute before it went back to just being a regular storm. My guess was 70 mph wind and just east of here a weather station clocked it at 67.

We were lucky. About 8 miles west of us, there were roofs blown off homes and a tire warehouse was torn apart. I only had part of my shed roof peeled open and lost a few shingles off of the roof of the house. 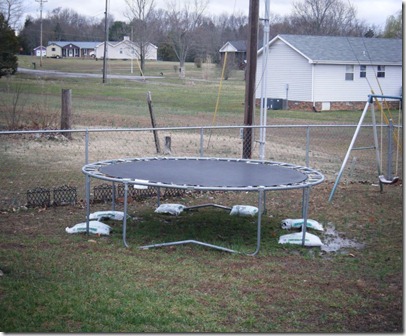 I have hated those bags each time I’ve moved them to mow under that thing.

My neighbors had a trampoline until last night. They had nothing to anchor it down and it temporarily became the world’s largest Frisbee. 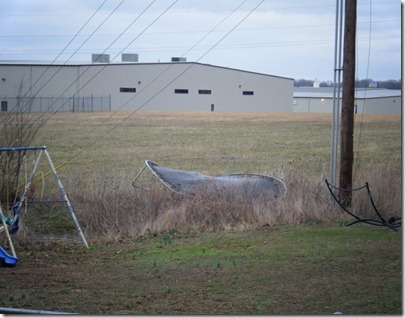 The impact with the ground bent the steel frame in half in two places. Luckily, it went out in the field and not into the side of a house. I walked out in the mud this morning to see if it was worth pulling back up for them and it is now just scrap.

And, we have more storms coming for Sunday night. I will have my shingles back on by then.