This means we would have to buy the DVD set in order to enjoy this blast from the past and I’m cheap. And, I saw all of them when they originally were shown back in 1982-1983.

I would recommend starting with the first episode so you get the experience of what seems to be the worst-produced canned laugh track ever. Most of the jokes are completely missed and the dubbed in laughter is so puny that it sounds like four people in a bathroom laughing at a poot. By episode 6, that person must have gotten fired because it does get better.

Episode 18 features guest star Bill Murray. He appears to be ad-libbing his entire part. (Of course, this embedded link will no longer work after March 31, 2011).

I’m not trying to say that Square Pegs was the best thing on TV but it was certainly unique for its time. Hit music is part of the soundtrack (lots of Billy Idol) and several bands of the day are featured (including a very odd Devo performance at Muffy Tepperman’s Bat Mitzvah).

Finally, I had forgotten how the school in Square Pegs looked a lot like my long ago demolished junior high school. 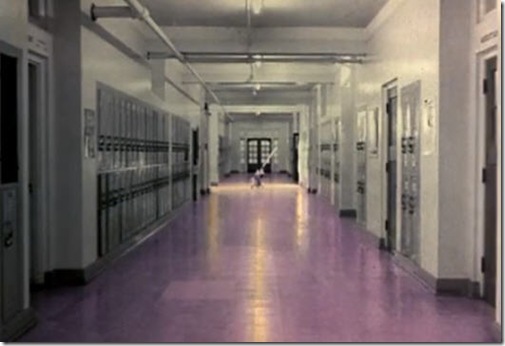 I even think that the door to the teachers lounge looked a lot like this. 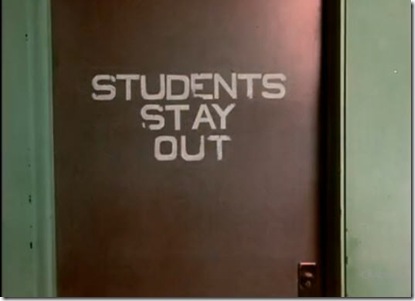 Finally, in other news, my Blackberry gets turned off at 4PM Central to begin my glorious week of freedom from all things work related!