Shut up! I’m watching the movie! 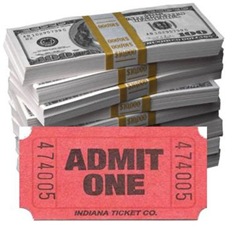 Why is it that I cannot go to a movie anymore without having to suppress the urge to throw my five dollar coke on either a group of unsupervised teenagers that won’t shut up, a group of kids that won’t shut up who are sitting with parents ignoring them (kids will be kids!!!), or a woman that brings a screaming one-year old in to a cartoon movie that the kid has no business being present for?

I wondered – why would a mother bring an 18 month old to “Rango”? Putting subconscious lizard nightmares in a the head of a baby is a great way to get you the good parenting award.

And, about 10 minutes into the movie, here comes three teenagers running up the stairs to sit right behind me. They are up and down and giggling and snickering. If you could see the way I dress these days, you’d realize that I’m not going to feel embarrassed when it comes to telling some kids to shut up in a packed theatre full of people. Tonight, I waited until the woman and her kid sitting next to me (the theater was nearly full) got up and moved because they could not take it anymore. I got up, walked up the one row to the teenage boys, leaned in, and said “I did not pay all of this money to listen to the three of you talk. Straighten up or you’ll leave.”

Oddly, not only did the kids look petrified (they actually got up and left within 5 minutes) but the other people around us looked at me like I was Charlie Sheen banging 7 gram rocks. I guess most people just endure crap like that.

When going to the movies costs roughly the same amount as a day at Disney, I’m not going to let someone inconsiderate ruin my night and my family’s night.

Of course, just like when I was a kid, a lot of kids are being dropped off at the movies so the parents can have quiet time. The theater becomes the babysitter and the lousy behavior that makes the parent want to get away is now the behavior I get to deal with. It’s a shame.

Maybe I’m just old and grouchy. Or, maybe I just expect too much. Or, maybe we just have a lot of parents out there who aren’t expecting enough.