Ghosts appear and fade away

It’s been a crazy couple of days. The storms have been rolling in, wave after wave. I upgraded my work laptop to Windows 7 on Monday (I bought into co-workers hype for Windows 7 – I am so dumb), discovered that Windows 7 severely hampered by ability to work on Tuesday (I am so dumb) and then proceeded to roll back to Windows XP by 9PM last night (Being dumb comes at a price). I am finally back up and running problem-free today. And, in between all of the laptop fun, it was crazy busy at work and I’ve still be getting over this touch of stomach whatever.

My soundtrack to all of this excitement has been an audio book I downloaded from the library called Thirteen Reasons Why by Jay Asher. I had read about it in the last Entertainment Weekly and our online library actually had an audiobook copy (which is rare considering 95% of what I look for is not available). In fact, I was listening to the book when I decided to take a break and flip over to Men At Work. It was more than just a decision – I needed the break. 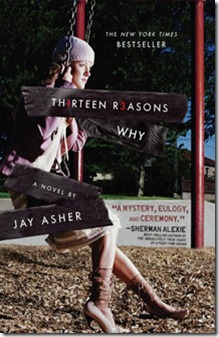 Thirteen Reasons Why is classified as a young adult book (as are many of the popular books today) and it’s about teen suicide – specifically a teen who commits suicide and leaves behind a series of cassette tapes detailing the reasons why this happened. I had heard of it in the past but decided to give it a download if the library had it to see if it matched up to what the article said. So, why did I decide I needed to read this book? Because, at least for me, no matter how many years pass by, there is still that grain of “Why?” in the back of my mind.

The real answer to “Why?” can’t be answered – it is a multitude of things and they are all unique to the person going through them. But, there are things I recognize in this book that are so close to things that actually happened. It’s eerie how realistic this book is.

The book is divided out like fronts and backs of the cassette tapes and the tapes address 13 different people. I think the audio is a good idea because reading with all of the back and forth between the characters would be difficult.

So, I am down to the section that is the last tape and I am putting that one off for a bit. Maybe I’ll get to it later tonight

I remember going to the library and reading books and articles just to make sense of the whole deal but there were no books like this one twenty-one years ago. It might save lives. It might make people understand. It might remind us older folks to pay attention to the little things our kids are saying or doing. It might remind us that they are going through what we went through and that we shouldn’t just blow it off because we happen to know that what is important at 15 won’t be important at 40. That’s an unfair way to think.

It’s a tough book. From my perspective, it’s actually hard to listen to. I’ve had to turn it off and walk away from it a few times. It’s made me think of things I hadn’t thought about in years. It reminds you that what may not be important to one person is certainly important to someone else. A chance encounter or a simple conversation might mean everything. It’s scary to even consider that, but it’s true.