On the night shift

I don’t typically update the blog when I can’t go back to sleep after the dogs wake me up to go out in the middle of the night. Normally, I walk around the house and look at the odds and ends that need to be done – empty the dishwasher (not full yet), restock the TP in the bathrooms (did that), fold the clothes in the dryer (too lazy to do that tonight) check the dogs for ticks after coming back in (did that), surf the internet endlessly (about tired of that), etc.

It’s remarkably quiet around here at 3:45AM but I’m too tired to make something of it. I haven’t been out of the house at this time of the morning in years except for leaving for the airport to catch a 6AM flight a couple of years back.

I worked the overnight shift at Taco Bell in 1992 when they were experimenting with staying open 24 hours. It was a disaster. One night, a hung over dude in a jeep fell asleep at the window after we handed him his food, locked the window, and walked off. I noticed him an hour later. We almost called the cops. I finally opened the window and woke him up by asking him if he needed something else. He was in a daze and seemed to be trying to figure out where he was and finally turned to me and said, “I need mild sauce, man”.

All the weirdos are out at night. This picture is not of my Taco Bell. It looks just like it looked back in the early 90’sbut mine was torn down last year and replaced with a more modern building. Ah, progress. 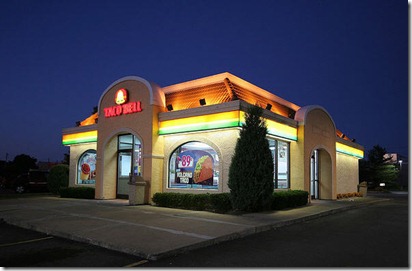 Most nights we had no more than four cars between 2AM and 9AM. Then the goobers in charge decided to start selling cinnamon rolls and orange juice. They didn’t realize that just the off-chance of catching a whiff of cooking taco meat at 5AM was more than enough reason for people to avoid pulling up to our drive-thru window. There’s just something about early morning tacos that can easily activate a gag reflex.

Now I’m starting to get tired. I’m tempted to just stay here on the couch with my slanket and Alex the dog (who had to come in here and crawl under my slanket). I’m just about too tired to walk back across the house. I’m also afraid I might notice some more housework that needs to be done.