A couple of months ago, I got jinxed by someone at church. They told me that I “never get sick”. Since then, I’ve been on the edge several times and today was my day on the couch – socked by some sort of stomach bug. My temporary diet centers around toast. 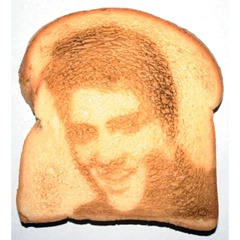 I should have seen this coming yesterday since I felt sort of anxious most of the day. I had a hard time sitting still and got way overheated outside while grilling lunch and then washing the dog (who had gotten into the grease like the little furry monster that she is).

Then, the dogs kept waking me up most of the night so, between feeling crappy and the constant dog interruptions, I think I managed about three hours of sleep.

It’s finally getting better. I owe that to buttered Elvis, I guess.

I’m heading back to the office tomorrow. Last Monday was pretty productive so we’ll see if this one ends up the same.

That’s it for now – back to couch patrol.