The most beautiful sunset picture ever taken 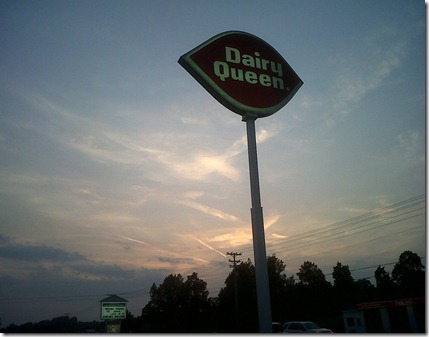 I think the world would be a better place if we could all take a Dairy Queen break every day. Unfortunately, my aging digestive system wouldn’t allow such tomfoolery. And, if we all did take a Dairy Queen break every day, the economic boom that all of the toilet paper companies would reap would not offset the sudden need for all of the sewer infrastructure upgrades that would be suddenly required. Taxes would go through the roof and the economy would be doomed forever.

Still, I wish I could find one of these signs on eBay so I could install it at the end of my driveway. 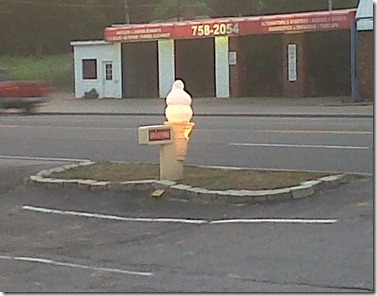 Tuesday was not quite as crazy busy as Monday but it was close. I dread tomorrow since that is the busiest day of the week for me and also typically the day that some unexpected chaos ends up making it even worse.

Finally and unrelated to anything I normally write about here, Vanderbilt University made the decision yesterday to scrap its campus radio station and end what was really the last truly alternative station in Nashville. Maybe it’s another result of the general public turning off the radio and turning on the iPod or maybe it is the power of the almighty dollar. The frequency was sold to Nashville Public Radio for over three million bucks.

The only good thing about all of this is that it is not becoming another Bott automated religious station. The bad thing is that Nashville Public Radio killed classical programming last year in favor of talk because no one was listening.

Sure, WRVU will live on as an online stream and will end up being put on an HD channel for the handful of people that have an HD radio (I’ll be able to tune it in on my Zune) but Nashville’s FM dial loses its last home for student programmed, student radio. That is a shame. Sometimes it was just nice to turn away from the overly programmed corporate stations and hear something original. I’ll miss it but I guess I’m a dinosaur. No one listens to radio anymore and I guess that’s the problem.