- July 30, 2011
I am back from the land of no blogging. I’ve been updating my file backups and moving things around on my laptops (work, personal, and netbook) over the past few days so I just haven’t had much time to update. When I did have time, the laptop has been running a backup or copying files. One thing I realize now is that I have taken thousands of digital pictures and many have become duplicated by moving between computers and external hard drives. It is going to take a while to clean up that mess.

Last night was movie night and the kids saw Smurfs while I ended up seeing Cowboys & Aliens. C&A is not my kind of movie. I don’t care for action movies. I like comedies. The last action movie I saw in the theater before last night was probably Independence Day way back in 1996. 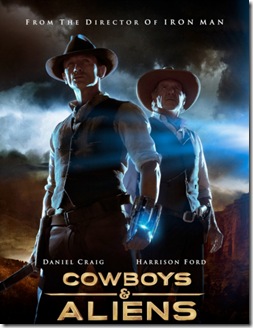 Since I don’t care for movie like C&A, it’s probably unfair for me to share my thoughts but I will give it props for having good actors in it who tried to make such a far-fetched story believable. Another problem is the huge lack of "buy-in" we have for the characters. None are particularly likable so you find yourself feeling a bit pulling for the aliens. These paranoid and self-destructive humans deserve to be probed and then turned to ash. Harrison Ford seemed to be lucid through the entire movie which is a lot different than he normally is on talk show interviews and throughout the whole Morning Glory movie. Olivia Wilde plays the eye candy and gets to tag along with the boys who are chasing aliens halfway across the desert. The time period for this is the late 1800’s and I seriously doubt any man would let her tag along but they do because these are modern men who are ahead of their time in believing in equality of the sexes, I guess.

Of all the performances, Daniel Craig is the best. He really needs to be in a Coen brothers movie. He’s so serious that he is nearly believable in all of the craziness that this movie throws at us. I am betting he will be incredible in the upcoming The Girl with the Dragon Tattoo movie.

At the end of C&A, there is a resolution to the whole story but even it makes little sense. I was not impressed and, based on the box office predictions, neither are many others.

As I wrote earlier, the kids saw The Smurfs. 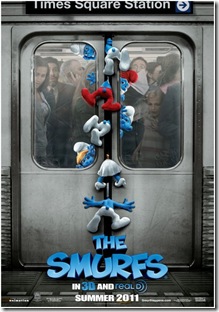 They did not seem to enjoy it much. All of the quick motion (all of it there to take advantage of the 3-D) was so jerky and fast that they said they had to keep looking down. I didn’t care for The Smurfs when they were on TV in the early 80’s and I sure don’t care to see them now. Still, they couldn’t have been much worse than the Alien mess.
*****
In nerd news, I finally had to tackle the upgrade of Firefox to 5.0 this week and the problems that the end of Google Toolbar support would bring. I have been a Toolbar user for a long time due to the syncing bookmarks across PC’s. I guess Google ended that support so people might be inclined to try out Google Chrome. Chrome has its own Sync function that is actually much better than using the Toolbar. I realized this after searching for decent add-ons for Firefox to sync bookmarks.

I ended up uninstalling Firefox from all of my machines and installing Chrome instead. Chrome is the fastest browser of all three (IE, Firefox, and Chrome) and the sync is flawless. I also like the built in apps that can be downloaded and installed. I’m very pleased with Chrome and I’m also keeping IE going on my work PC for work related stuff.
*****
Finally, we got over an inch of rain this morning but now it feels like it is 1000 degrees again since the humidity is back. I hate to say I am ready for Fall because Fall lasts about two weeks here. We basically go from melting in the summer to freezing in the Winter with hardly a break in between.