We’re back in the comfort of the air conditioned house. We drove up to Kentucky last night and stayed at a hotel so we could get in some pool time. This morning, we drove up to Beech Bend Park and split our time between the water park and the “traditional rides”. This is a promo picture from the website since we did not bring in any camera or cell phones. 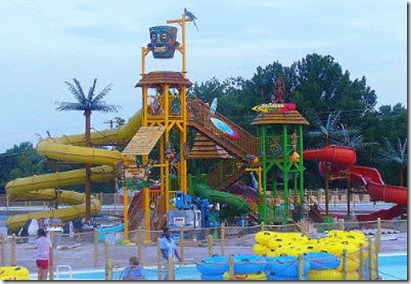 What we had not planned on was the brutal heat. So far, today was the hottest day of the year up there and down here. Notice the heat index in this snapshot? That’s at 6:53PM!! Still 112 degrees! When we left the park, they said that the heat index was 116. So, after getting completely exhausted, we left 3 hours earlier than we had been planning. 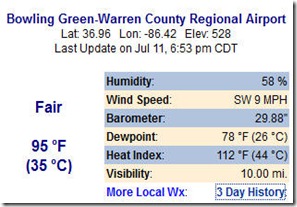 So, here are my thoughts on Beech Bend – it’s an A. Some of the rides in the amusement park area were what you might expect to see at a county fair. Some of them, like the Kentucky Rumbler, were huge, custom-built rides you would expect at a place like Opryland (R.I.P.) or Dollywood. Speaking of Opryland, they had rides just like the old Flume Zoom and the Tin Lizzy cars! They also have one ride (Sea Dragon) that they bought from Michael Jackson’s Neverland Ranch!

What surprised me was the variety of rides and how much everything is spread out. You can tell that this is a park that is steadily growing. The water park was very nice. They had tons of stuff to do and plenty of seating. There were employees everywhere and every one we encountered was friendly. The park was immaculately clean.

Give it a few years and this will be one of the premier parks in the southeast.

Is it a value? Ticket prices average 30 bucks a piece but discounts are out there. We had two buy one, get one free coupons. There is also a discount through the web site. But, the price also includes free soft drinks, free sunscreen, and free use of the floats. These are typically all charged items at other water parks. The food was also good and not too expensive. I had a cheeseburger and a slice of pizza and both were very good.

No, they are not paying me to say any of this. I was very pleased with the value and the trip (only about 75 minutes each way). The heat really made for a shorter day than expected. We should have spent more time in the water and not tried to write as many rides!

On a final note, we caught part of the Kent Family Magic Circus. The kids really enjoyed their show. They have a son who balanced a 6 foot ladder and a wheelbarrow on his chin. My chin hurt just watching. They have a really interesting blog where you can read about all of their travels. It is one of the most unique blogs I have read and quite a cool collection of memories that they are building for their kids.

I have one more day of vacation tomorrow and we will be spending it closer to home. We’re supposed to hit 100 degrees again tomorrow so I won’t be getting any outdoor projects done. I guess most of those will have to wait for my next vacation in October! After tomorrow, I go back to work and my family heads off to Gatlinburg for a few days in a cabin up in the woods with the bears. I’ll be here minding things with the dogs and plenty of odds and ends I can try to work on around here until they return on Saturday.