While everyone else went to Glee 3-D, I did the grocery shopping at Walmart and then headed to the movies to watch The Help. 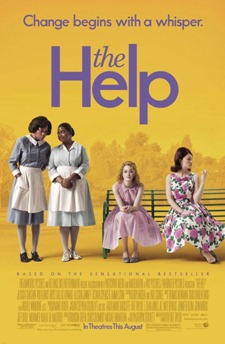 I just finished reading the book last week. The immediate challenge is that there is an awful lot of book here to try to cram into a movie and that is probably why this movie was a bit longer than some people might expect at 2 hours, 17 minutes. I guess since I just read it and have it fresh on my mind, I felt somewhat rushed. The result is that the depth we have with the characters in the book does not translate to the big screen with two notable exceptions – Aibileen (Viola Davis) and Hilly (Bryce Dallas Howard). These two deserve Oscar nominations. While Emma Stone seems to be portrayed as the main star (and she is quite good in her role), Viola Davis carries the movie and flat out deserves the Oscar. Of course, I believe her character is also the main character in the book. Aibileen is the glue that holds it all together.

The ending is hopeful but still heart breaking. It is exactly true to the book and most of the audience was left in tears and this is all because Viola Davis is able to play the scene in a way that is so incredibly true (true being the only word I can think of to describe it) that you just can’t believe that people can be so incredibly wicked. (You’ll just have to go see it to understand what I mean.)

Most of the audience did not appear to have read the book. They gasped at the parts I knew were coming all along so the ending seemed to really hit them out of nowhere.

That is a point many of the reviewers miss on this movie (and the book). Hilly, in what will be Bryce Dallas Howard’s breakout role, does get taken “down again and again” but it only seems to make her stronger and more bull-headed and more tragic. She gets knocked down but always manages to win in the end. She is unwavering and nothing makes her change.

At the end, the full theater (maybe there were 20 empty seats) applauded. And, oddly, most did not get up and immediately leave. Maybe they were cleaning up after a good cry (and there was a lot of crying).  Sure, there was some comedy in there but for the most part it pulled no punches. I think most people were just stunned by the whole movie in part because things haven’t changed quite as much as we would like to admit.