Sure, it’s Monday. But it’s also the day that I went to my daughter’s dentist and had surgery. He extracted the money from my wallet after he explained how much her braces are going to cost. Even after insurance, I’m in it for about $4000. Yep – four grand. I don’t have four grand in plasma to sell so I guess I’m going to have to join the Chippendale’s Chubby Dancer Program. Or, I can mow all of the lawns in the neighborhood. Maybe I can sell lemonade in my driveway. Hmmmm.

In Nook news, I finished The Help this weekend. 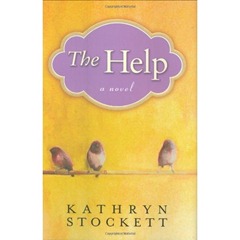 It’s quite a story. It’s actually downright scary in parts when you think of the danger these maids are in when telling these stories. It’s disgusting when you read about how they are treated by the people they work for. Sure, some of the nastier of the people in this book get their comeuppance but it’s still not enough.

Now, is it the best written book I have ever read? No. It moves far too fast. It glosses over a lot. One of the three main characters has a mother who appears to be deathly ill by the middle of the book (even the doctor seems to give her just weeks but maybe months to live) but it still hanging on without explanation at the end (when this main character appears to be about to move hundreds of miles away while leaving her still dying mother behind). The author loves to stir up drama for drama’s sake and then just yank out the rug and move on with no explanation. Also, a lot of history is mentioned but sort of glossed over.

What really gets me is the apparent backlash by some in the African-American community over this book because they don’t like the fact that a white woman was the catalyst behind the black maids sharing these stories. In the most recent Entertainment Weekly, author Martha Southgate wrote, “Minny and Aibileen are heroines, but they didn't need Skeeter to guide them to the light. They fought their way out of the darkness on their own — and they brought the nation with them.” I don’t think the book hides the fact that Minny and Aibileen are doing the “heavy lifting” when it comes to telling these stories. I don’t think the book hides that they are the heroines. But, if you go into this book (and through life) with the idea that everything has an agenda (Martha seems to believe that the agenda here is to convince us that black people can’t do anything without a white person leading the way), then you’ll come out of the other end of the book with the same idea.

I believe that there were a lot of Minny’s and Aibileen’s out there and the risks they took everyday just to provide a roof over the heads of their families was quite incredible and inspiring and I’m looking forward to seeing how it ends up looking on the movie screen this weekend.