We saw “Crazy, Stupid, Love” at the theater last weekend. We did not wait for it to go to the Redbox so that right there tells you that we were hoping it would be worth the money. 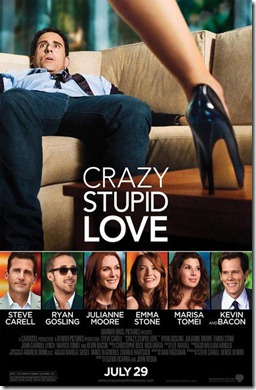 It was a pretty good movie. The cast was likeable and it was toned down to fit the PG-13 rating except for one inexplicable and completely unneeded F-bomb. Maybe they added that to get the PG-13? I’m not sure if a PG-13 rating is more attractive than a PG rating or not but it could have been to set this apart as a romantic comedy for adults vs. a romantic company aimed at the teens. They can have “Twilight” – we’ll keep Steve Carell.

There was a twist in this movie that I was either too full of popcorn or enjoying the movie too much to notice before – wham! – it got me. It’s like a Seinfeld episode where it all comes together by the end. The subplot involving Steve’s son and his babysitter is quite funny also.

It’s a winner. It’s quite intelligently written and there are plenty of little personal touches you learn about each character that makes you really buy in to each of them.

The movie also had me analyzing the way I dress as I am not far from Steve Carell’s age and too often I throw on an old polo shirt, a “relaxed fit” pair of jeans, and tennis shoes. I learned that this combination is a no-no.