Here’s a picture of our yorkie, Angel, with my old Mac Classic II. Both are gone now. I no longer have the file of this picture. I printed it out way back when and kept it. 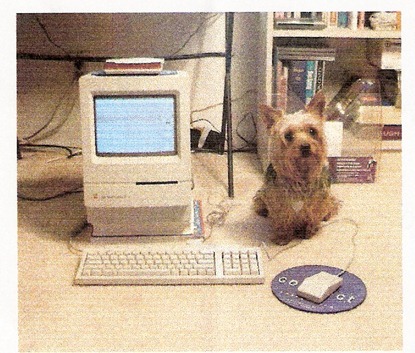 Note the blazing fast 14.4 modem on top of the Mac. At the time, this thing was blazing fast and could do things that we’re just about unbelievable.

So, Steve Jobs was a rear end a lot of the time. I’ve read all of the nasty things people keep bringing up and guess what – no one is perfect. I’m sure plenty of the jealous and not creative people who crossed paths with Jobs over the years made a point of recording every imperfection they could just so they could boost their own bruised egos.

If you’re going to do big things, you’re going to have to be not so nice. There are a lot of naysayers out there. And, yes, Jobs was a pretty bad father also. His priorities were a mess. But, I never bought an Apple product because I was trying to validate the personal life of the man behind the product. I bought Apple stuff because it worked. I bought it because Apple took the nasty side of computing and hid it behind a very user friendly interface that we could all use. I bought it because Apple unlocked the door to so much we could never do before – real desktop publishing is one thing I can think of that completely blew me away. We could all make real newsletters. We could all make real professional documents.

Thanks to Steve Jobs, we can go to a computer and not boot into DOS and have to type in commands to open programs. Did he invent every innovation? No. But he did believe in innovation and he had an eye for what the common user needed. Before Macintosh, the features of computers today that we take for granted were only accessible to the very wealthy or quite connected. Home computers were a joke and small businesses still using pen, paper, and filing cabinets were trying to compete with big businesses that were totally automated.

Steve Jobs and Apple made real computing accessible for the majority.

Sure, people complain today that iOS is too locked down. Apple controls it all! The horror! But, it works. This is the failing point of Android. The system is beyond fragmented. Go to Walmart and look at 4 different tablets on four different versions of Android and then remember that they all cannot run all of the Android programs.

Think about how fast Mac evolved while Windows lagged behind. It took years for Windows to try to copy all of the good things in Mac and they only finally got it right in Windows 7!

I miss my Mac. I miss Oscar the Grouch jumping out of the trash can and singing when I deleted things. But most of all I miss the feeling I got discovering all of those cool things I could do on a Mac for the first time.

People born after 1992 think we’ve always had those things and we need to thank Steve Jobs for that, warts and all.