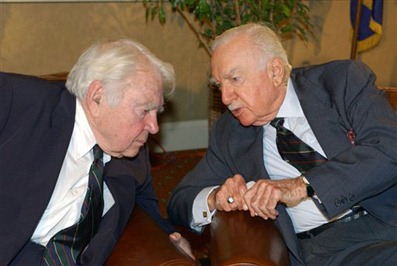 When Andy Rooney delivered his last essay on 60 minutes just a few weeks back, I was suspicious that something was up. I expected him to work until the last possible moment and I thought we were seeing just that. When news soon came that he had been in surgery and that there were complications, I thought that there was no way we would hear such news about such a private man unless his family realized that there was no chance of survival. Imagine the essay-length rant that we would have all heard or read if he had recovered. Sadly, he did not.

Andy has gone to a place where there is no impossible to open plastic packaging and no partially filled bags of chips or boxes of cereal. I’m not sure what he’ll write about there.

Here on Earth, we’ve lost a great voice that pointed out a lot of what is wrong. Sometimes he spoke of the minor annoyances of day to day life and sometimes he took on the great injustices that no one would dare speak of.

In the obit posted on CBSNEWS.com that he appears to have penned himself, three such injustices stand out:

“Native Americans demanded apologies when he belittled their efforts to stop sports teams from using names like "Braves" in 1995 and again in 1997 when he suggested Indian casino profits be used to support poor tribes. He reacted to the acquittal of O.J. Simpson in 1995 by offering a $1 million reward for information leading to the real killer - a reward he said he would never have to pay because Simpson committed the murders. His essay in 2004, in which he said God told him that the Rev. Pat Robertson and Mel Gibson were "whackos," resulted in 20,000 complaints - the most response any "60 Minutes" issue ever drew.”

I feel like I’ve watched Andy Rooney my entire life. I always wanted to be a writer. I’ve just never figured out exactly what I want to write. I also loved that we saw his desk in his office during his segments. I like to see how writers write and what environment they do it in.

A lot of people said that Andy Rooney was a curmudgeon. He didn’t seem to respond to praise in the way a “normal person” would. He was turned off by it and sometimes appeared offended. I think he was just uncomfortable with it. I spoke at church last week for 45 minutes. It’s something I prepared for over a couple of weeks but the most difficult part of the whole thing for me was having to go to the door at the end and shake hands with everyone and be thanked. I know that sounds silly but it’s nice to know that Andy Rooney appears to have felt the same way.

I’m not sure I want to work until I am 92 but it would sure be nice to love what I do and be good at what I do all the way until the end.

Andy said it best and I hope he’s right -  “Writers don’t retire and I’ll always be a writer.”