It’s the last day of 2011! Instead of going back through the blog archives and trying to find something exciting out of all of my boring moments, I decided that I would continue the tech theme from yesterday (which was a nice break from my two day magazine rant) and look over all of the stuff I ended up with this year and would pick out the one gadget that was the best value. For me, that is the Logitech Portable Speaker S135i.

Here it is, on the bathroom counter. I was listening to WGN in Chicago this morning while getting ready to take on another exciting day. 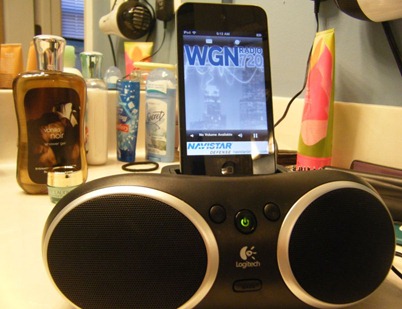 The speaker is right around $49 (as of today) at Amazon.com but I found mine on clearance at Walmart for $25!

It runs off of an AC Adapter or batteries. It also charges when plugged into AC. We use it all over the house. We also had it in the garage earlier this week playing an iHeart Radio station out of San Diego. It was nice listening to a station where the weather is so much nicer than it is here.

As for New Year’s Eve, the plan is to watch Anderson Cooper and Kathy Griffin ring in 2012 in New York at 11PM our time and then go straight to bed. There is no point in staying up until midnight just to see it again on tape delay. Watching Dick Clark always makes me feel sad for him so I try to avoid that also.