- Wednesday, January 11, 2012
Skip reading this today if you don’t want to read another one of my tech-induced rants.
Earlier today, MG Siegler pointed out this tweet from Twitter’s General Counsel, Alex Macgillivray:

Folks asked for examples. Here’s what a user searching for “@wwe” will be shown on the new @Google. twitter.com/amac/status/15…
— Alex Macgillivray (@amac) January 11, 2012

Twitter is offended because they feel that they are being “buried” in Google’s search results under the new Google Search+. I think that this is Google promoting their own service which they have a right to as a company. I don’t see Twitter freely promoting its competitors anywhere so I have no idea why they expect their competitors to do so.

Take a closer look at the picture: 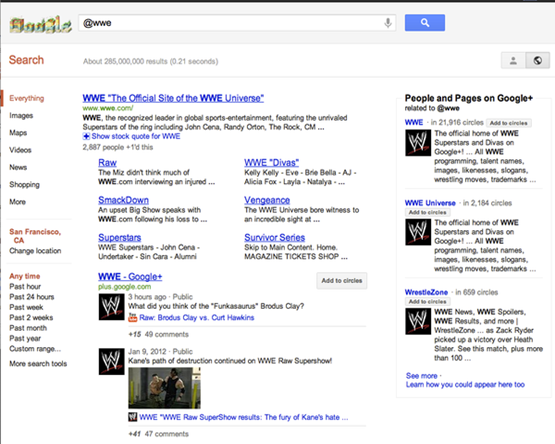 Now, look at what is just barely down the page: 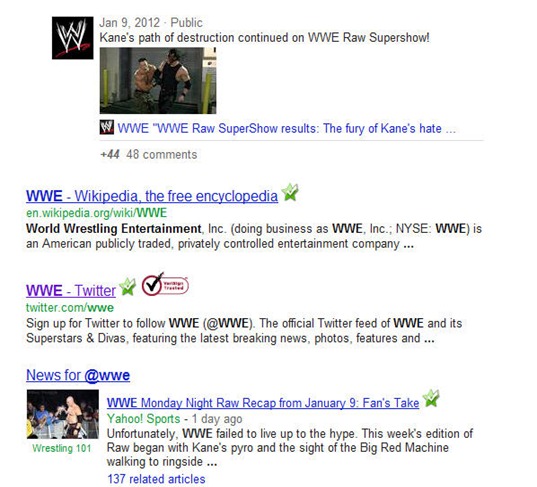 Twitter is actually the fourth result! They are whining about being the fourth result. Big whoop! I don’t think it’s hard to find at all. And, why would Google “showcase” a result for a competing service for free?

Finally, Twitter doesn’t even title the page “@wwe”. Why would a search engine index it as @wwe (and give Twitter the coveted top result) if that is not even the title of their page?

Should Google, again for free, create a script to insert that in there for them? I certainly don’t think so.

Does Google have a responsibility to mankind to be Twitter-friendly? Give me a break.
People need to seriously get a grip. It’s business. It’s not a charity and it’s not an anti-Twitter conspiracy.

Twitter, stick a Google search box at the top of your page for free and maybe I’ll reconsider.