I cannot tell what you say green leaves, but you certainly make me sneeze

- Friday, April 13, 2012
This has been one of those weeks that made getting to the laptop long enough to write a meaningful blog post impossible.

Not only have we had stuff happening at church each night this week, but work has been particularly busy. Plus, I started off the week with the roof chaos.

A lot of good fodder to write about has happened in the news – Ann Romney (Can’t the democrats just shut up?), Rick Santorum (He finally shut up after making a rousing speech about sweater vests in which he compared himself to Lincoln), and the big D.O.J lawsuit against Apple and the book publishers. That’s the one that gets me since I work in a related industry plus I did work at Barnes & Noble a long, long time ago.

It amazes me how expensive eBooks are, especially since I have a long-term and extensive knowledge of how much cost is associated with distributing real books that are printed on real paper. The pressure should not be on the stores to reduce prices – the pressure should be on the publishers since they are laughing all the way to the bank while Amazon, B&N, Apple, and Kobo wrestle each other in a winner-take-all competition. You see, the retailers get 30% of the publisher suggested retail price. If Amazon cuts that price, they are taking it out of their own pocket. But, let’s look at J.K. Rowling’s new book as an example: 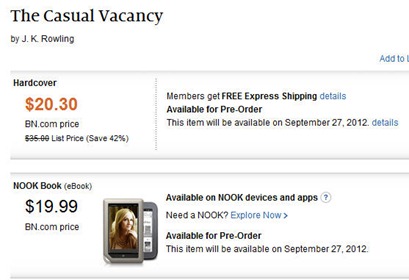 Now, maybe this price will be adjusted before September. Let’s hope so. As of today, it’s the same at Amazon and Apple also. $20.30 for a hardcover and $19.99 for an eBook is insanity. But, we’re supposed to be mad at B&N or Amazon for this? We need to be mad at Hachette for this. They won’t print one page. They won’t ship one page. They won’t take one return. The eBook can’t be resold as used when it is read so nothing can be recovered from the purchase price for the buyer. There is virtually NO retail overhead.

Remember back in the 80’s when records went away? 45’s went away also. The ability to buy a single decent song from an otherwise crappy album vanished almost overnight. I guess enough people complained because a limited selection of cassette singles did eventually pop up and even some CD singles were available later. But, for the most part, we had to buy the whole album or lump it. That was until we figured out we could copy off the songs to our PC’s and share them and burn our own CD’s. Why did this happen? It happened because greedy record companies really thought we would be forced into buying $17 and $18 cd’s for one or two good songs.

The publishers are doing the same now. They are overvaluing their content and I believe that are partially doing it out of greedy (don’t forget what Glenn Frey sang about the lure of easy money) and they are doing it partially out of a desire to breathe continued longevity into real, printed books. I buy both – real books and eBooks. There will continue to be a market for both though the market for printed books is obviously shrinking. Even I get tired of opening my Nook and realizing I didn’t charge it. I’ve never opened a real book and found blank pages because I didn’t plug it in.

Finally, Amazon is more than willing to undercut the competition by sacrificing their 30% cut of eBooks because they make their money off of selling Kindles and other items. I have had three Nooks – a first gen Nook (now sold), a Nook Simple Touch (which is fantastic even though I am now drooling over the new one with the GlowLight), and my wife has the Nook Color. 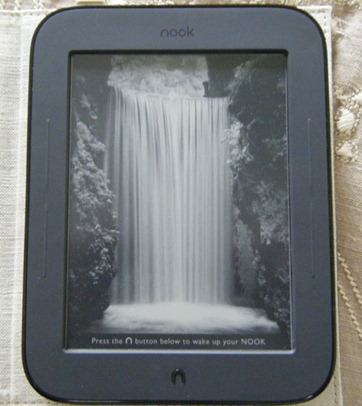 Why did I choose Nook over Kindle? For one, Nook supports the widely-available ePub format and Kindle does not. They want you locked in their store. I’ve never bought a book from anywhere other than B&N but I am glad to know I could if I wanted to. Also, Kindle didn’t support checking out library eBooks until recently. Again, they wanted to lock you in to their store. And, they now want to lower prices by taking a loss and destroy their competition so we will end up only being able to read off of a Kindle.
I don’t like the idea of that at all.

Yes, the publishers need to step up and get real and lower prices for everyone. Then, the hardware can speak for itself. Finally, we as consumers need to see the big picture and support companies that aren’t shredding memos, dodging tax collections, and conspiring to take over media distribution chains by whatever tactic they deem necessary.

O.K. Enough of that. It’s finally Friday and I am ready for at least a little downtime. Let’s end with the poem I stole from to title today’s entry here on the blog: