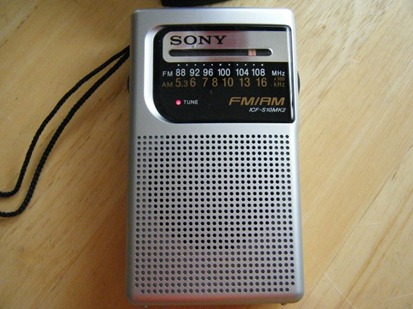 I’ve read a lot about this radio on listening hobby sites. Most people want a little radio like this so they can listen to rare, distant stations late at night. My goal was to recreate the experience I had with a little transistor radio back when I was growing up and I achieved that goal. First of all, the radio is mono. I happen to still have a mono earplug that works perfectly with it. If you plug in stereo headphones, you’ll only get sound on the left.

There is something to be said for listening in mono. That leaves me an ear free to hear the kids if they wake up and start stirring around. It was handy when I was growing up so I could hear if my parents were up and about to catch me listening to AM radio at 2AM. I had a few close calls.

Just last night, I was listening to one of the stations I always listened to on my little green transistor radio way back when – WLS in Chicago. Stations on the Sony come in loud and clear and the controls are so basic that you don’t have to worry about turning on the lights at night to fiddle with it.

For the more technical people who read this, I wouldn’t call this radio a DX machine. Selectivity is not so great. One strength is you can null signals quite efficiently. One weakness is you might be holding the radio the wrong way without knowing it and you’ll null out what you should be hearing. This radio has no problem with all of the usual channels you hear here at night (WBBM, WLS, WBAP, etc.) but I’m not finding anything other than the most powerful stations. I’m going to give this one a try with my Grundig loop sometime over the weekend. I played with the loop during the day and it does dramatically improve weak daytime reception. 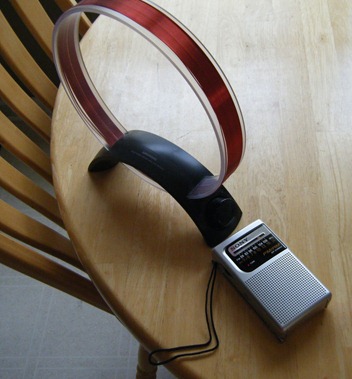 That’s all for my thoughts on the Sony. To the non-radio people, I apologize.

We’re expecting rain in here tonight and tomorrow (much cooler tomorrow also). I don’t have any big plans for the weekend. I’m hoping to get at least a little rest coming off the steroid pack and before my ‘procedure’ coming up on Wednesday afternoon. More on that later. No biggie there – just another biopsy for the medical records. I’m expecting it will be another negative one. I can’t say I am too concerned. I am mostly just annoyed to be getting cut on yet again.

So, another fun week is ahead and a tiring week is finally behind me.