One small leap for sanity

- Tuesday, April 17, 2012
Oh, what a day. I finally decided to tackle my Acer netbook screen problem this afternoon. It’s 3 or 4 years old and had developed a weird short in the display connector over the last year. The screen would keep getting brighter or dimmer (it was always random) any time I would type or really even touch the thing. It was just about unusable when I retired it to the shelf with all of the other relics and parts.

So, where is the sanity in this story? I took the whole thing apart and found that most of the connectors were brittle and appeared to be corroded. To me, it’s the kind of corrosion I would expect in a tropical environment but that is not a problem here. I’m thinking it is just cheap parts.

I had a choice to make. The “old me” (old being six months ago) would still be fighting with the thing and frustrated as all get out – recovering the worn connector wire, etc. – until I got it back together and maybe usable. The “new me” looked at the mess and immediately threw it into the recycling tote. Gone. I saved the display panel, the RAM, and the hard drive. The rest is garbage. I didn’t even bother putting it back together.

This sounds like an easy decision and for most people, it is. I not only hate to waste or throw away anything until I have squeezed the last iota of value out of it but I also have a habit of seeing these sorts of messes as challenges that I just can’t let go of no matter how frustrated I get or how much time I waste. I’ve done that stuff over and over. Sure, I’ve come out the other side with things working most of the time. But, I’ve also sat up at the kitchen table until 1 or 2 AM on similar stupid projects with mixed outcomes.

It’s just not worth it.

I have spent years wasting various amounts of time on things that, looking back, I realize now just were not worth it. And, the more I realize what is “worth it”, the more I get into a position to see things that others get hung up that is just not worth it either. I guess we all will learn at our own pace. Look how long it has taken me and I’m not there yet.

In other news, Alex the Dog got a new hairdo today: 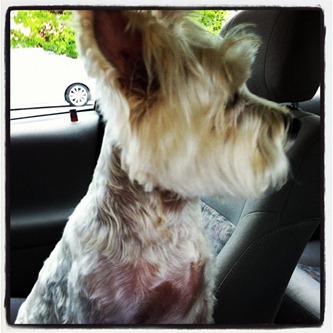 Finally, I am really enjoying the streaming radio via my iPod Touch lately and I found a station that I highly recommend on TuneIn– Clare FM, from Ireland. It’s a mix of music going back to the 80’s –sort of what we used to call adult contemporary. I think I just enjoy hearing the DJ’s Irish voices. It’s oddly soothing for some reason.