- Tuesday, May 15, 2012
Why would I write about something so boring as a vacuum? So other people don’t make the same mistake I did. 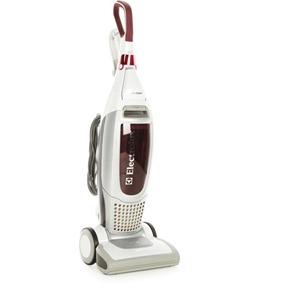 Now you can buy this vacuum for $99 refurbished at Big Lots. Don’t do it. They probably have thousands of refurbished units since everyone is complaining about the same part dying on these vacuums – the brush roller. Check out Amazon for similar complaints.

Unfortunately, ours was full price and it dies 3 years and 4 months after purchase. I had a $40 Eureka that I bought as a Thanksgiving Day special that lasted me almost 8 years and was still running when I gave it to the thrift store. It’s probably still running today. Did it have the power of the Electrolux? No. But, it also didn’t clog up every 20 minutes either. I think I spent more time cleaning filters on this super heavy monster than I did actually using it. It’s been a nightmare. It’s also as loud as a jet engine plus the wheels started squeaking about a year ago. I can only compare the squeaking to someone running their fingernails like a chalkboard. I can imagine people in hell have to vacuum with this model vacuum for all eternity.

I have never had a vacuum give out in such a short amount of time. My parents had an old yellow metal Hoover canister that lasted at least 35 years.

The suction power had been dwindling over the last three or four months so I should have seen it coming.
Oh, well – my new Dyson is ordered and on the way. I will never buy Electrolux again.