Why I’m watching America’s Got Talent

- Tuesday, May 22, 2012
Who would have thought it? I am actually choosing to watch America’s Got Talent this year.

The kids have always enjoyed all of the acts so it’s been on in our house just about every summer but I typically zoned out. That’s changed now with the addition of Howard Stern. 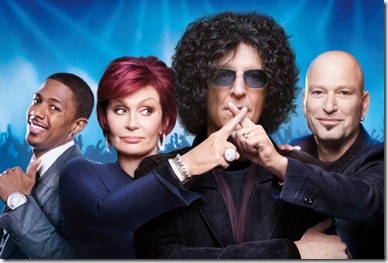 Why is that? You need to throw out every misconception you might have about Howard Stern. Instead of filling in the grouchy role of Piers Morgan or a mean jock shock shell of a person, Howard Stern is incredibly supportive and seems genuinely excited not only to be part of the show but also, and most importantly, for the individual acts. I think he brings an energy to the rest of the show that everyone is feeding off of.

What you end up with is fun. If the act is awful, Howard Stern might pull his dad out of the audience to tell that person to stop being an idiot. If the act is great, all 4 of them applaud and overwhelm the act with praise. Everyone calls Howard Stern the shock jock when the real shock is that he has made America’s Got Talent must see TV by bring heart and not barbs.

Finally, there is a reality talent show with no grouch – no naysayer – no insulter.

That’s the secret of Stern – his over the top, shock ‘em into listening persona has mellowed out and he’s risen above all of the stunts and gimmicks that have been what he was known for even though most of it happened almost 30 years ago now. People who have seen him on Letterman for years have seen the real deal and I, for one, am happy that mainstream America is getting to see the real deal now also.

Sure, America’s Got Talent is mostly just throw away entertainment but I’ll be watching. It’s a diversion from all of the bad crap going on in the world and I think it’s exactly what we need right now.