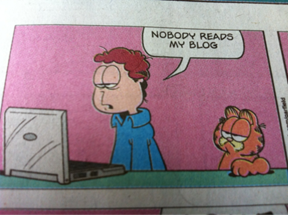 I never thought it would last. I had tried and failed with two other blogs on two other sites before arriving at Blogger and giving it one more try. I guess the third time really is the charm.

The blog now reads as an autobiography of sorts. There is a lot of ground covered here and a lot of events. It’s hard for me to believe that it has been five whole years.

I’ve been lucky enough to ‘virtually’ meet a lot of people over the years who have also tackled this writing thing quite nicely. They have kept me going with their perseverance when I’ve been tempted to fold this thing up. A list of those blogs are on the right side of this page.

I’ve also been lucky enough to have a few thousand people stop by from all over the world. They end up here because of Google mostly but it’s their fault for Googling some weird search terms. “Toilet paper” brings people here a lot even though it’s been quite a while since I wrote about TP (until now).
Whatever reason you made it here – thanks for stopping by. Now, go over to the main page at Blogger or Wordpress or Tumblr and get to sharing and creating. It’s a fantastic way to keep growing and thinking and you should do it for YOU and no one else.

Once you get started, you’ll be amazed at how fast five years will fly on by.