The secret thing you must do to have a good vacation

- Saturday, June 16, 2012
The best thing about this vacation is that I totally dropped off “the grid” for the first time in years. In past vacations, I did my best to ignore work emails but it never worked. They never stop coming in and, even though I turned off the alerts, I always gave in and checked those emails from time to time. This caused the normal frustrations of work to actually leak into my time off. 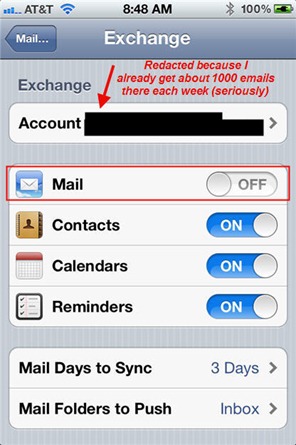 I am betting there will be around 1000 to sift through on Monday morning when I return between the direct ones (important) and all of the ones I am copied on (some important, some not, some resolved in my absence). This always on connectivity has brainwashed us into feeling weird about letting them pile up unchecked. That’s totally unhealthy.

I’ve had a “smart” phone for so long now (from Treo to Blackberry to iPhone) that being connected all of the time seems routine. As dumb as it sounds (and it does sound dumb as I am writing it but it’s still oddly true), it’s also hard to get out the thought out of your mind that you are getting further and further behind as each email piles up even when you are on vacation.

I can only imagine what it’s like for people who have grown up in “the internet age”. They are always connected. My kids are part of that.

When I started working, we backed up files on old 8 track tapes and the only connectivity was sending reports via an old modem. When you left work, you actually left work. There was a total and complete separation from work from the moment you left until the moment you returned there.

Those were the days.

Thanks to the ever present tether of the data plan that we carry around with us, work is as close as our pockets 24 hours a day. We have to make a decision to not let it control our entire lives. We have to set boundaries and we have to work to make our families a priority once the work day ends and especially during our vacations.

You would think that this is common sense but when Facebook’s Sheryl Sandberg said that she leaves work every day at 5:30PM, it actually made the news. Our culture is so screwed up that we applaud productivity at work over having marriages that last and raising kids that don’t end up in therapy. For a lot of people (I’ve worked with my fair share), staying at the office 12 to 15 hours a day and having thousands of hotel points and airline miles is like a badge of honor. It’s insane.

One thing I have been good about is being protective of my family time but it’s taken me too long to realize that turning off the email is what has to be done sometimes. That final piece of distraction has to be removed. Thanks to the off switch, this week off has been my best week off in years.

When I have my next week off in just a month (another weird thing for me – I have never taken two vacation weeks during the summer before), turning my email off will be the first thing that happens.