Like ice cream melting in the sink, these are the days of our lives

- Friday, July 28, 2017
This is ice cream we bought over the last few months that ended up abandoned in the freezer. 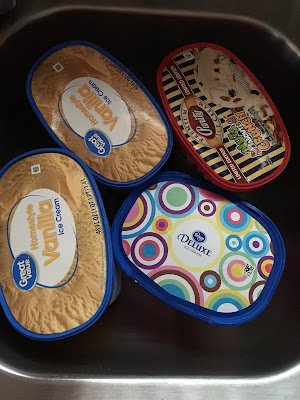 We rarely eat ice cream at home. Ice cream is a treat and we typically go somewhere like Baskin Robbins or Dairy Queen for it. However, we often go to the grocery store and end up walking down the ice cream aisle in search of something else and it lures us over.
Hey! Buy me! You know you can have the pop of joy you get when you go to Baskin Robbins or Dairy Queen right there in your own home!
Of course, that pop of joy is tough to reproduce at home and it rarely happens. Most of these end up having a scoop or two eaten and then the rest sits in the freezer until it finally meets its demise in the sink to thaw and then pour down the drain.
I share this because it's a good example of a lot of the shopping I have done over the years. I get this little pop of joy from buying something only to have it end up languishing around the house until it ends up being sold on eBay or given away to the thrift store.
As much as I have tried to improve this, I still relapse. Just this last weekend, I ended up in Goodwill - a place I should never walk into to. I always walk out with something I don't need. On this trip, I walked out with three things I didn't need. I have already forgotten what one of the items was. It's totally gone from my mind. (Edit: I just walked the house and found it. It was a tiny Vornado fan for $6 that is sitting on the table by my recliner. I use it every day so that actually turned out to be a good deal!)
The other two items are Sony clock radios. One is a model I know I have had and given away at least three times over the years. The other is one I once wanted to try for beside the bed but I was afraid it would be too bright. I bought these for the kitchen since I no longer have a radio in there and, guess what, neither picks up the station I wanted. I ended up fiddling with both for a day or two and then putting a battery operated radio I've had for years in there. Both of these clock radios are now in a tote of crap in my bathroom closet awaiting their eventual trip to the thrift store if I find no other use for them.
Sure, I could return them but Goodwill only gives store credit and I would just buy something else I don't need.
To make a short story very long, why do I do this? Why do I buy things I don't really need? What part of my brain is yelling BUY THAT! IT WILL MAKE YOU SO VERY HAPPY! and why is that part of my brain yelling that?
In conclusion, it is getting better. Instead of this happening weekly and at one point daily, it now happens about once a month and I instantly feel guilty which keeps me out of stores even longer. The struggle is real but I can see the improvement and am on the right track. I just need to stay out of all stores, especially those with clearance aisles.