- Saturday, August 19, 2017
Yesterday was the day I took on something I have been wanting to take on for a long time - I finally (FINALLY) closed the front door on Twitter. 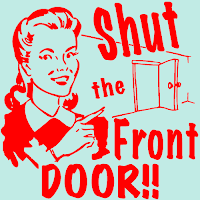 What does that mean? First, I went private with my tweets. Second, I blocked everyone I don't know in real life or have some reason to follow. Third, I unblocked all the folks I blocked but they no longer follow me because my profile is now private and they can only follow me in the future if I approve them. Fourth and finally, I pulled a Taylor Swift and deleted all of my old tweets, leaving only the last month of tweets. Oddly, my profile still shows 21,000 tweets although you can only see my tweets back to July 18th now.

First and foremost, I have nothing to promote and no need to have tons of followers or really any "social influence" whatsoever. Getting more listeners for Up In This Brain doesn't concern me at all and the other podcasts I am on have their own Twitter accounts. I know that no one can retweet me with my account set as private but, like I wrote earlier, I don't have need for nor care about "social influence", whatever that is.

Second, the lack of privacy as my kids get older was concerning to me. About 75% of my nearly 400 followers were bots that had followed me and never unfollowed me over the years. There were also quite a few folks who might have been real people I bumped into somewhere along the way but there was no real need to keep in touch or I already follow them on Instagram where they are more active and the environment is less rant-friendly than Twitter is.

I am now private on all of the "big 3" social networks (Facebook, Twitter and Instagram) and I know that doesn't ensure total privacy. That's unrealistic. However, it does give me a bit more control over who can interact with me and a tad more peace of mind than I would have if everything was wide open.

Third, I don't see my tweet history as having any real significance at all. The expiration date on a tweet is just about as soon as you hit send. The world is moving that fast. Also, searching back through tweets for something is clunky. I will keep using Facebook for the rare post of milestones I or my kids might want to look back on one day.

Finally, I had too much noise going in my Twitter feed and it was sucking the joy out of being on there. Now I have sort of redefined it for me. I can focus on a more limited group of people and use Twitter as a private community of ideas and sharing instead of the wide-open free for all that it has turned into, especially over the last couple of years.

This last election just about ruined Twitter for me and I had gotten to the point where I dreaded opening the app. I am hoping that using it in a different way will lead to a more positive experience and more interaction with folks I truly care to connect to.