Coffee matters today because of Frasier and Niles Crane

- September 14, 2017
Seeing the story today about Nestlé taking majority ownership of Blue Bottle had me thinking a bit about coffee and how much the coffee industry owes the Crane brothers.

That's right - every company that has made a ton of money on coffee since the mid 90's should be giving a huge thank you to Frasier and Niles Crane and their many scenes in Café Nervosa. 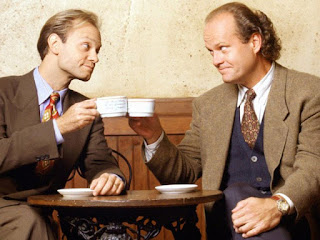 Before Frasier, coffee was just coffee to me. I grew up with my mother fixing coffee in the old percolator we had. I believe it was always Maxwell House. Sure, I would get the occasional cup of coffee at a restaurant, but coffee was mostly an afterthought. I never considered what brand it was or what different drinks might be out there like espressos or lattes.

On September 16, 1993, all of that changed with the premiere episode of Frasier. We are introduced to Frasier's brother, Niles, standing at the bar in Café Nervosa. This was a year ahead of our first peek of Central Perk in Friends and the first time I ever associated coffee with something more than just something to drink to get warm or stay awake.

It took awhile for coffee shops as we know them today to pop up out here around Armpit. Now we have Starbucks, Dunkin Donuts, and tons of local coffee shops to sit in and talk and read and work while sipping a variety of drinks and most of these shops remind me of how Café Nervosa looked on television all those years back.

Just writing this gave me the urge to brew a cup of coffee and watch the premiere episode of Frasier on Netflix!