The Cars I Drove and The One I Still Drive

- September 29, 2017
As teased on the latest Up In This Brain, here is the much-anticipated entry in which I present a list of the cars I have owned and was the primary driver of and the pictures I found!


1985 Chevrolet Cavalier
My first car! Aside from weird random breakdowns and multiple water pump and alternator replacements, it was a great car. It took me thousands of miles during high school and almost all of college. I have lots of great memories of this car. Sadly, at about 160,000 miles (which was probably beyond its life expectancy), there was a problem that was deemed more expensive to fix than it was worth and it was wholesaled out for parts.

1991 Pontiac Sunbird
The Sunbird replaced my Cavalier and it was basically the exact same car. It had the exact same mechanical issues also. It went through alternators and water pumps like crazy but lasted me past getting married and even moving back to Tennessee in 1998. I loved the color. I've always been a fan of blue on a car.

1973 Volkswagen Beetle
My first purchase in my dumb Volkswagen obsession in the late 90's. I didn't keep it long and there are no pictures. I got rid of it when I found the Super Beetle.

1973 Volkswagen Super Beetle
This car was mint but had that dumb autostick that was nothing but problems. I ended up selling it to a collector for more than I paid for it about a year after I got it. 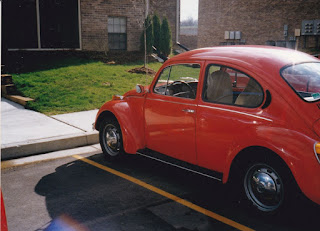 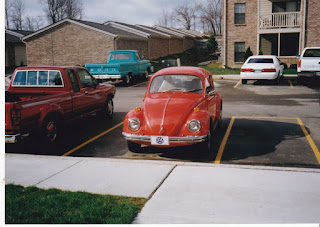 1982 Volkswagen Rabbit
This ended up being a winter beater for a bit. It was a good car, less than 70K on it. I sold it for what I paid for it when we decided to move back from Cincinnati. No pictures!

1984 Volkswagen Rabbit GTI
My last VW. Bought here in Tennessee and sold here also. I finally got over my VW thing. There are pictures somewhere but I could not find them.

1985 Cadillac Seville
My dad knew a guy that had this car in mint condition with less than 40K on it. It was my last dumb car purchase. I can't remember who I sold it to. 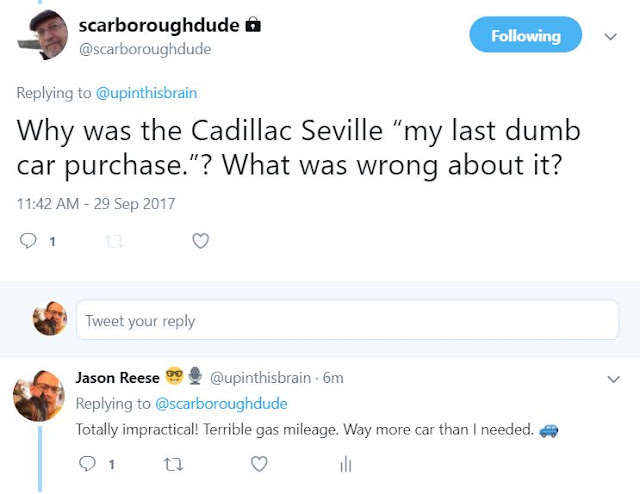 1996 GMC Jimmy
I barely had this maybe six months. Nothing but problems. No pictures.

2000 Chevrolet Metro
I did an equal trade on the GMC Jimmy for this brand new 2000 Metro. I loved this car! It was a 5 speed and had like no power but the gas mileage was great back when I still commuted to Nashville every day. I wish I could have kept it but it felt dangerous once we had the kids so I finally sold it. 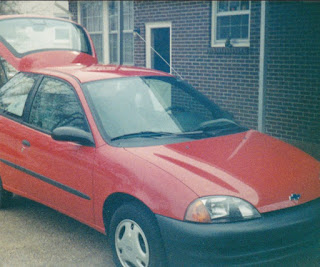 2003 Pontiac Vibe
I bought this car and almost immediately got a company car, leaving this car to sit most of the time. It was also a 5 speed and I ended up trading it on a new car for my wife after a year or two. I am sure there are pictures somewhere but I could not find them.

1999 Ford Contour "The Mighty Ford Contour"
Lots of memories in The Mighty Ford Contour. I miss this car but it slowly fell apart over the years and I finally turned it back in to the company last December. I was one of the last people with a company car and mine was the oldest by far. When it was in good shape, it was the most comfortable car I had even driven. It drove great in the snow.


1999 Buick Regal "Proud Grandmother"
This was my mother's car, bought by my parents in 2000. My father didn't need it after she passed away so I took it once the Mighty Ford Contour went away. It's in nearly perfect condition and only has 130K on it. Since I work at home, I don't put a lot of miles on a car and we always take one of the other cars on trips. It's my "run about town" car and will be driven to our away football game tonight. It's like driving a pillow. Comfy!