- Saturday, February 10, 2018
I've noticed my musical tastes have taken a bit of a shift in the past few years, away from popular music and toward jazz and classical music. I stream stations that play this music. I even bought a better FM radio so I could get the local classical station clearer. I've bought MP3's, CD's and even more vinyl albums. I guess I am in a rediscovery phase.

I call it rediscovery because I was a liberal arts major in college and I had to learn so much about jazz and classical in such a short time in the early 90's that it suffocated the joy out of it for me. For example, when you have to cram classical tapes in order to score high on tests that prove you can recognize composers and styles (most of which I seem to have forgotten permanently, oddly enough), you sort of develop a distaste for it all. Well, maybe you wouldn't, but I did.

Now I have what I keep referring to as art regret. You see, I had the chance during my college years to not only really develop a love for jazz and classical, but to really immerse myself in it and I chose to just do the bare minimum (which was quite a lot) and to not love the music but instead to have a forced relationship with it, a relationship which put up a barrier in my mind and prevented me from really digging in deep and understanding and appreciating it.

In fact, I treated all of my time in college like this. I was never really content being in music, the honest truth being that I wasn't that good at it. I always had in the back of my mind that I should have been majoring in English or journalism. My heart just wasn't in it. So, when I had the opportunity to go to art shows, plays, musicals, etc., I only did what I had to do and I feel like I missed out on quite a lot. Now I long for all of these things but I have plenty of responsibilities that keep me from them. There is not much free time to drive to a photography exhibit or to go to a college concert and I see that I missed out on doing it all the time, 24/7, when I had no other responsibilities. I could have been a much more well-rounded person and I might (might) be doing something creative as a career now. 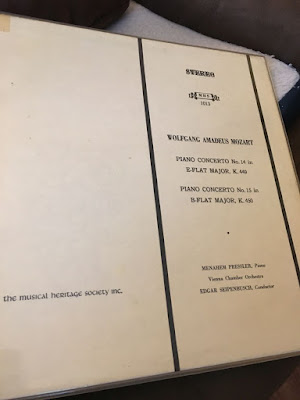 I've been thinking about all of this for a while, as I've sought out jazz stations to stream and slowly built up my classical vinyl collection via the local Goodwill and even as I've read book after book from the library. All of this rediscovery of how connected I once was with the artist that apparently lives inside of me wishes I had realized all of this when I really had a chance to experience art in all forms. Now I feel I am on the outside looking in and really too late in life to make any sort of meaningful change aside from dipping my foot in by listening to some records on a quiet, rainy Saturday morning or flying through another book that gets me fueled up, ready to create, before remembering that my ship has pretty much sailed, each new and rediscovered experience tied a bit to the regret over what I had the chance to do long ago and simply didn't.

Sure, John Mahoney was 37 when he realized what he was missing out on and he took action. I'm not far beyond 37. The big problem is that I don't exactly know what I am missing out on or what I should be doing. There is just the feeling that there is something missing. I know that the empty space is there but I don't have any idea about what to fill it with.