Eyes to the skies

- March 20, 2018
I'm happy to report that we dodged another weather bullet here at the home office. We ended up with a non-event here, only some light rain, after several days of notice to prepare for what could have happened.

This graphic that I saw around 8AM local time turned out to be incredibly accurate. North-central Alabama was very hard hit, especially in Cullman, a place we typically stop on the way to and back from Florida on vacations. 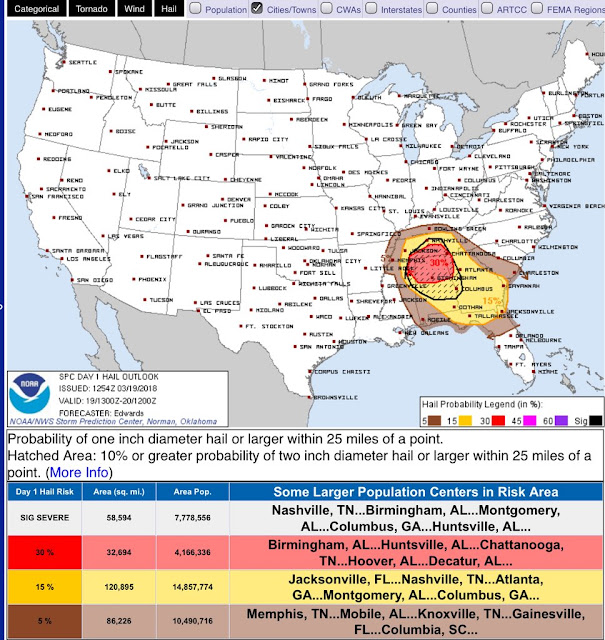 I get most of my weather information these days from Twitter accounts like @NWSNashville, @NashSevereWX and @spann because they share just the facts without the hype and hysteria and misinformation that I have found on the local television news at times. Last night's coverage was no different. On one local station, a reporter out on a remote told us that we were all under a Tornado Warning and a tornado could drop from the sky at any moment. Luckily the anchor back at the station immediately clarified this - it was a tornado watch meaning conditions are favorable and be on your guard but no tornado warnings were in effect.

A little bit later, I saw a newscast open with a script that was probably written hours earlier stating that hundreds of thousands of people were in the path of danger although the threat at the moment had been declared pretty much non-existent by the Twitter accounts I follow and the lack of storms was obvious by taking a quick glance at the radar. The television folks were then left with live pictures of dark clouds with sun peeking through. I guess they had invested so much time into what they thought the main story would be that they just didn't have much else to show.

I don't know what to make of all of this and I think a lot of the blame has to go to local news being on for hours a day now. Here it's on from 4:30AM to 7AM and then midday and again 4PM to 7PM at night. They go beyond just forecasting and just reporting. It's almost like a hysteria thing. Maybe that's how they get people to watch and watch and watch. How can this much news, most of it repeated over and over every 30 minutes, be good for us? Of course, that's a topic we spend a lot of time on elsewhere and it goes far beyond the weather.

Also, there seems to be a fear of a generational outbreak of tornadoes with each large system that comes through and maybe it will happen. Maybe there is a fear of the ones that were missed so it's best to treat everything as a "what if" but I think regular people who don't really understand radar and models and don't really want to or need to and who don't follow weather-focused Twitter accounts might just start thinking that television news is crying wolf too much and will just turn it off and start ignoring all of this. They even let school out early here yesterday and that has happened several times in the last few years and nothing has happened each time. I never remember being let out early for severe weather when I was a kid. Are the storms worse now? Are kids really safer being sent out to their homes than in a school? People have died in schools in recent outbreaks. People have also died in homes and cars and convenience stores. There is no way to avoid all of this and unfortunately all of the forecasting in the world may still not save me if an F3 or F4 or F5 comes down the street. It's quite the dilemma and I don't know the answer.

The danger of a scenario plotted out in the above graphic is quite real. Just ask the people cleaning up in Jacksonville, Alabama this morning. I've been there, with thousands of dollars in damage to my house after a storm that didn't seem to last two minutes. But I don't think the answer is scaring people with big red words STORM ALERT on forecast screens (when no actually watch or warning has been issued) or talk of the hundreds of thousands in the path of a monster storm when said storm hasn't even developed yet. Now the local stations here even have storm chasers driving around, beaming back pictures of dark clouds and rain, and one last night pulled up to a little road full of other storm chaser vehicles. I wonder if they are all doing it for the science or if some of them are there for the ratings and the attention. Who knows.

I think we have to find a more realistic, calm way to convey weather information. I remember in the late 70's and early 80's when we had a local weatherman, Bill Hall, who calmly got us through stormy day after stormy day and was a hero to kids like me who were interested in the weather and science. We need more people today with his attitude and demeanor so we can be prepared and aware but not scared out of our minds by hype and "what-if" overload. His friend and anchor Dan Miller, now also sadly gone, wrote this about him when he retired:

Bill has never much concerned himself with all the fancy TV slogans and electronic weather gimmicks. His real concern has been the people on the receiving end of the information he dispenses. I cannot count the times Bill has said to me, "I don't want to unnecessarily alarm people."