Throw it away now!

- March 22, 2018
That's my advice after last week. I had to put down a new floor in the shed and in order to accomplish this, everything had to come out. That's when the ugly truth was revealed - the shed had become a haven for discarded whatnots that I was just too lazy to fool with and even though I took out a load of trash last year (which I recall being quite proud of at the time) it still took two more full loads going to the dump to get it all straight.

I can't ask 2010 me what I was thinking when the radiator heater that started leaking ended up in the shed instead of the dump nor what 2011 me was thinking keeping an old pool ladder rusting beside the shed all these years that we haven't had a pool. How about the exercise bike that I bought at a garage sale and used for a year before it broke and ended up in the shed since 2008 or so?

I think the big change is that I see things differently now, meaning material things. My bar for keeping things has been raised higher and higher with each passing year so the amount of things I keep is less and less. But that doesn't excuse the fact that I kept a lot of things in the shed and the attic that I was unneeded garbage. If it won't go in the can, that's a drive to the dump and most days I must have been too busy (I hope) or too lazy (most likely) to do it.

When it breaks, make up a plan to toss it out as soon as possible, no matter where you need to drive to junk it or recycle it. If you don't, you'll have a mountain of stuff to deal with all at once. I certainly speak from experience on that.

Here are some after pictures of the shed. I was too embarrassed to take before pictures!

The floor is up off the ground on a metal frame. The middle piece of wood is just for extra stability to keep the frame from shifting in storms. I have a high wind kit on the shed but I had a storm a few years back that still moved the whole building about six inches to the side and knocked all the shelving over. Now the shelving is zip tied to the wall to prevent that. 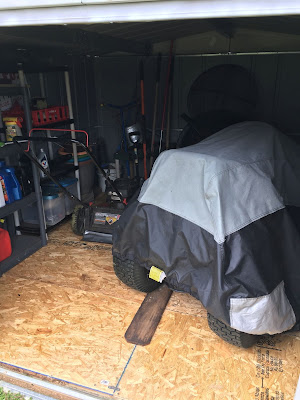 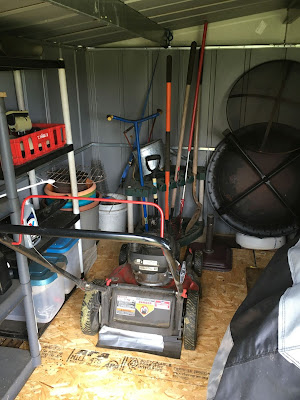 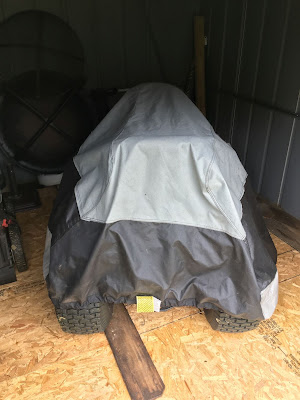