- Saturday, June 02, 2018
I just noticed something I bought last Saturday and I suddenly realized that a whole week had gone by and I have very little to show for it. In fact, most of the events of the last week have been forgotten and even today seems to be flying by.

Being where I am in life's calendar, I would think there is no time to waste. How can it be that time just slips away without hardly a memory? There is no way every day can be filled with something momentous. There has to be time for trips to Walmart and watering the yard and lazy afternoons reading while sipping a cup of coffee. The only problem with days like these is that they go by in a blur and the days and months sneak on by until there are few days or months left.

Then, the horror, I got into my head thoughts of autumn and how nice the cooler weather will be and it's only June 2nd! Summer hasn't officially begun (even if it does feel like we have lived in an oven for the last month) and I'm already ready to bypass it in favor of fall!

What is wrong with me? How can I apply the brakes a bit and appreciate the now?

I have no idea but the roses in front of the house were just watered. It may not be momentous but they are nice to look at. 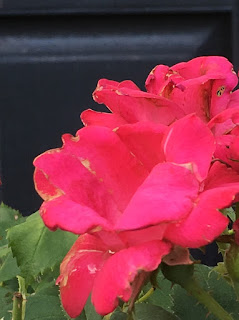