I need to stop buying stuff

- June 19, 2018
As I clean things out, I must also stay focused on not letting stuff creep back into the house.

The only way I know to avoid dumb impulse purchases is to stay out of certain stores.

Here's an example of what happens when I slip. Just last week the day before my attic purge, after weeks of driving by and not stopping, I had a little extra free time and decided the best use of that time would be to stop at Goodwill. Why not?! I'd been good. It was time for a little bit of what Anne Lamott correctly refers to as retail therapy.

What is retail therapy? Well, it's nice, just walking around a store alone and looking for treasure among the trash. Goodwill, unlike Walmart, is full of surprises. You never know what will end up on the shelves and I am tempted by just about all of it. The act of buying something is a nice, albeit temporary, escape from the problems of the world. It's also like a reward - something tangible to show for your work.

Of course, it is also someone's discarded junk, the result of someone else's attic purge probably but let me try not to think about that!!

On this particular trip, I spent only $6 but I found five 99 cent items and they all came back with me to the house. One was a multi-record set of Lawrence Welk Christmas songs and I bought that for the Christmas podcasts so I feel it was totally worth it. My 9 listeners will be the judge of that later this year.

However - the other four items were bags! BAGS! I don't need more bags! 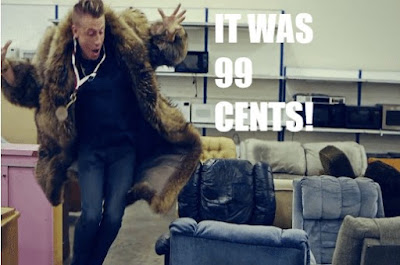 Then the attic purge happened and two of the bags went right back out the door to the help center. Two stayed. One is a nice Jansport messenger bag WITH THE TAGS STILL ON IT so I am keeping that in case me or the kids want to use it. The other was a Targus iPad bag which I have already used twice (WINNING!). To make up for this, I went through all the bags and got rid of several more I no longer use.

But the point is - I didn't really need any of that stuff and the temptation would have stayed out of my mind if I had not gone in that store in the first place.  I really need to avoid thrift stores (a major weakness) and clearance aisles (a huge weakness) and I need to remember that I already have way more crap than I need and I am already making plans to get rid of more of this crap so why would I keep adding to the pile?