The two states of soda

- June 04, 2018
There are two states during which a Pepsi tastes really good.

State one is ice cold. The best way to achieve this is with a can that has been in the fridge for at least a day and stick it in the back of the fridge so opening and closing the door doesn't diminish the cold. Open this can and pour it directly into a ice-filled glass and by ice filled I mean right up to lip level before you pour in the Pepsi.

State two is the Pepsi is just starting to get warm. You're outside eating your lunch, preferably on a picnic table, and it is sunny and hot and the ice is still intact but melting but not melting enough to really water down the drink and that taste of Pepsi takes me right back to summer days at my great-grandmother's house in the early 80's. Be vigilant! State two only lasts for a few precious moments before the ice does indeed water down the Pepsi and watered-down Pepsi is undrinkable.

Of course, she was a big fan of Double Cola and then R.C. Cola. Those were the country colas. 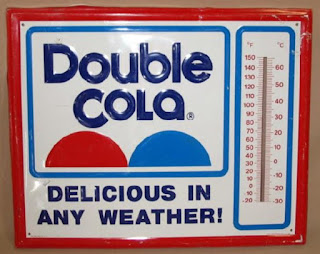 I prefer Coke. Maybe that's because I am a city-cola-snob. But I have found that Pepsi tastes better in state two so if you want to try to recreate this, Pepsi is your go-to soda.