- July 27, 2018
I've had a lot of idle time over the past few days as I have sat either in various waiting rooms or my father's hospital rooms (rooms because he has been moved several times but this is a sign of progress so that is a good thing) and I've been filling quite a bit of that time goofing off on my iPad. I should have been reading one of two books I checked out but it is hard to concentrate for too long with continuous interruptions.

Twitter is perfect for very short chunks of concentration so I have been spending a lot of time there and I have a new appreciation for Twitter after the last few days. It was on Twitter that I found someone had shared an article called "No, you probably don't have a book in you" and I've been thinking about that article on and off since I read it.

At first, I took it as discouragement and as a way to gatekeep. "These are the real writers. You are not and will never be one of them. Stay out of the way of the real writers and let us keep our exclusive club to ourselves!"

As the somewhat intelligent side of me took over from the typically reactive side of me, I moved from considering this as discouragement to acknowledging that what the author, an agent, is sharing is reality, albeit a disappointing one.

Take, for example, this quote: "Writing artfully so that someone enjoys what your're writing is even harder."

How does one write artfully? I have no idea. I obviously have no book in me but I have known that for a long time.

If you do want to write artfully, you can take the author's class and probably find out how.

Obviously, it boils down to being a commercial author in pursuit of monetary success instead of just pursuing the art out of the joy of just making art. I make podcasts. None will ever bring me monetary success unless I make major, major changes that I may or may not have the skill to make but I don't make podcasts for any reason other than my own person enjoyment. 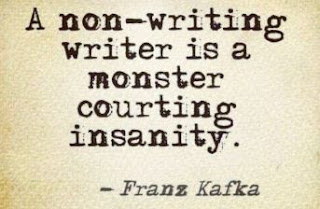 The author mentions options to apply my podcast way of thinking to writing. "There are many options if you just want a copy of your story that you can hold in your hands," she writes, although she doesn't share any of these options. I assume you might learn them in the above-mentioned class.

I think that creators will and should create regardless of the discouragement or the reality but I do realize the freedom that comes with me not having the pressure of my creations having to be used to pay the mortgage.