Picking up the trombone again 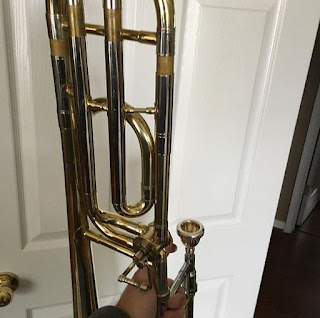 Since my youngest daughter and wife recently joined the local community band, I said, sure, maybe it's time to pick up the trombone again and give it a try. There were two problems though. First, I haven't regularly played since 1995. Second, I no longer owned a trombone.

The priority was to get my wife an instrument and we found a good deal on a nice flute and she has already begun rehearsal. She also had not played since 1995 but seems to be doing fine. She will play in the Christmas concert two weeks from tonight along with my youngest daughter who is in the high school band and playing in the community band to get more experience with different percussion instruments.

I said I would hold off for now but I was still perusing eBay when a decent Blessing B-78 Trombone showed up for just $120 plus shipping. A new basic student trombone goes for hundreds more than that and this has an F-attachment and is pretty much the same as the Holton trombone I played in college.

Sadly, I don't play at the level I played at in college anymore but with time, I think I will get back to at least being decent.

It's going to be a tough road. I definitely have issues with air and control and I am practicing at least 30 minutes a day out of an old method book that I used in high school. Though I've taken a pass at trying to play this concert in two weeks, I'm planning to join up when they return in late January and hopefully I will be able to play at the spring concert.