- February 25, 2019
A couple of weeks ago, I opened up Facebook Marketplace, which I do from time to time although I had never bought anything on it and one of the suggested items surprised me. In hindsight, it shouldn't have because Facebook obviously knows more about me than I know about myself. It was a shortwave radio and I do love radios. This particular radio is one I had been curious about for a while and the price was insanely low and the seller was just about sixty miles away.

The radio, which I picked up last weekend, is an Eton Executive Satellit. It was being sold as new in box for the insanely low price of $25. That's right, a radio that typically sells for around $110 new, for $25. It seemed too good to be true.

The pictures were of the radio in the box. I asked if it had been tested. It had. The seller had multiple good reviews. I went for it.

And, I'm glad I did. It ended up being exactly as described. 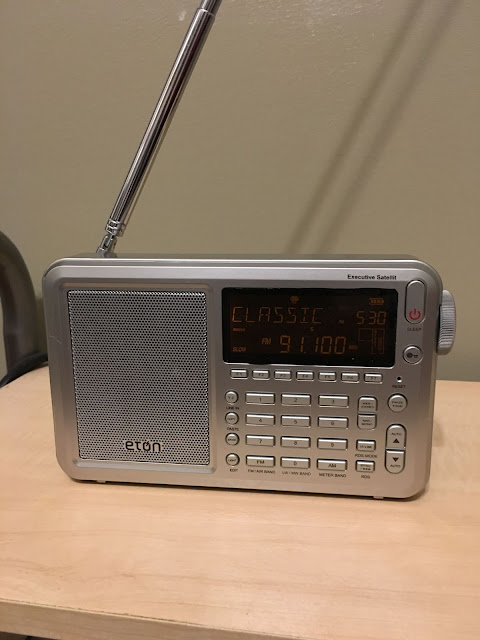 I did place a piece of Dim It Light Dimming Sheet over the display because the display was just too bright for my liking. Since I took this picture early last week, I trimmed the sheet down to the correct size so it's hard to tell it's even there now.
The reviews of this model are a mixed bag so here are a few of my observations:
And, what a bargain I got! It's easily the best radio bargain I have even gotten.
So, would I have paid full price for the Eton Satellit knowing what I know now? No.
If I hadn't gotten this deal and instead I had to buy a radio for full price, I would buy a new PL-660 with the latest firmware which allows you to align the radio yourself. Performance between the radios is quite close and the PL-660 is simpler to use overall plus the charging system on it is better. The Eton Satellit is still using the same charging system as the old Eton E5 (Grundig G5) I had that finally stopped working.
But, the misalignment, which appears to be a common problem with the PL-660, is a real letdown. Luckily, it's just on FM and the airband so I will keep using my PL-660 some for shortwave and the Eton Satellit will be my main, all-around radio with my Sangean PR-D4W being used when I am serious about listening to MW which is usually just about every night!