- Saturday, February 23, 2019
I finally had to repair the pockets of my cardigan sweater. The pockets had slowly separated from the sweater and had begun to resemble loose flaps. This was quite unsightly and bordered on embarrassing.

This particular sweater, one of two that I bought on clearance at the local outlet mall, probably in 2003, hangs over the chair in my home office and never leaves the house. I use it on chilly days when I don't want to turn on the heat and on warmer days when the air conditioning is going full blast but I don't want to turn it down because the sun bakes the side of the house where the home office is later in the afternoons.

I've worn it many times and I probably don't wash it often enough but it serves me well and has a nice Perry Como vibe to it.

Here it is, folded back, right before the repair procedure commenced. I used a wonderful product called Liquid Stitch and glued those pockets nicely back in place and then I placed stacks of books on each pocket to apply pressure for a few hours. Sewing them would have required finding a thread that matched and who has time for that? Liquid Stitch has never failed me and is perfect for lazy people like myself. 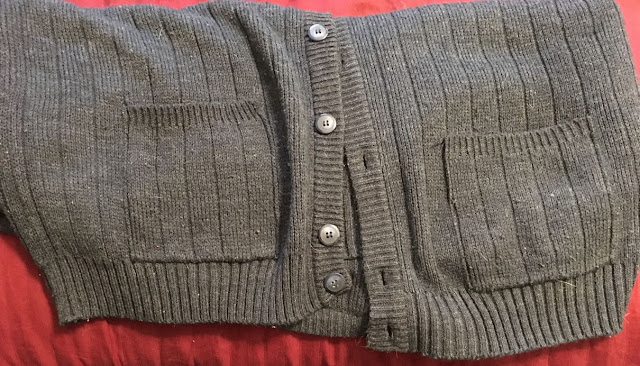 Don't look too closely at that picture because I am sure you would see corgi hair on there if you did (I just saw one) and I've had to resign myself to having corgi hair somewhere on me at all times. I keep trying to clean it all up but he sheds faster than I can sweep and vacuum.

As I mentioned earlier, there is a second sweater that I bought on that day many years back which is identical aside from being a slightly darker color. It has gone on the lam. It used to live in my bedroom closet and was rarely worn. I guess it was a backup sweater. Don't laugh. Mr. Rogers had a closet full of them but even he could only wear one at a time.

Everyone in the house says they have no idea what happened to it but I am sure one of them took it on a chilly day and misplaced it, hopefully somewhere in the house. I would hate to have it lost permanently and I doubt anyone would have worn it outside of them house since these sweaters are terribly out of style.