- May 11, 2019
Since slamming on the brakes on social media, this site, podcasting, healthy living, etc. I have slowly returned to these things with a mostly new attitude and as part of that I have slowly creeped back into the world of Twitter.

It's interesting to only have 9 followers now after I blew everyone away. I think it's a pretty accurate reflection of how many people still use it on a regular basis. At one point a few years ago before the first purge, I had accumulated nearly 500 followers. I had about 100 before this most recent purge.

I mostly only look at Twitter now on my personal laptop and sometimes I don't open my personal laptop for two or three days and I no longer feel like I am missing out on anything. This has been nice. What has not been nice was opening Twitter and seeing what is trending. Typically what is trending is a bunch of toxic garbage like the so and so is over party or quasi-celebrities who trend because they say really stupid things.

There is no way to turn off this list of trends so I decided to put mine in Japanese. 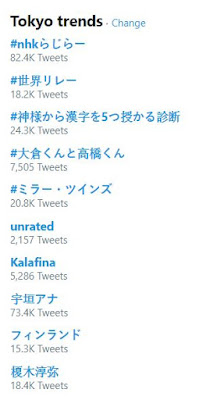 Sure, it's possible that this is full of toxic garbage also but I don't know that. I can't read any of it aside from the few English works that sneak in from time to time and I never click on those English words anyway. unrated could be about anything and I will never know and certainly don't care.
But, Jason, maybe you are missing out on some important breaking news? And, you might be right. That's the risk I have to take. Google News is the only news app I look at on a regular basis and its algorithm might be excluding important things. Who knows. I also stopped watching the evening news a few months ago and I can't say I really miss it.
I assume that someone I follow on Twitter will do the dirty work for me and will share or comment about anything that is really important. And I have family members that are tuned in to what's happening who would probably mention if Armpit is about to be bombed or something like that.
It's odd because I was that tuned in person for years. Newspapers. Magazines. Network news, national and local. I knew it all. But what good did knowing it all do? I was filled with anxiety over how out of control our world was/is.
For now, ignorance is bliss.