First point - I've been quite mindful to make this a real staycation and that means shirking as many domestic responsibilities as I can. Sure, I mowed the yard because the forecast is calling for a ton of rain starting today. But I did not do most of my usual inside tasks such as mopping, cleaning the shower, etc. These items can wait a week although typing that just now makes me cringe with funkiness. Thanks to this additional freed up time, I have been able to watch several movies on TCM, finish one book, get an impressive head start on another and read most of the New Yorker Summer Fiction Issue.

Second point - With staycations come not cooking at home much/at all and that means eating out more than usual which would not please my doctor but does please my desire to reduce my domestic responsibilities this week (see First point) and this has exposed me to more terrible restaurant service than I am used to. Even if the service is technically good, meaning that the order arrives correctly the first time (which has not happened at two major chain restaurants so far this week), most employees I've encountered are just not polite. You say thank you, they just glare at you. They almost drop the plate on the table and not because it is hot (I checked) and they are so distracted that you have to ask for something two or three times before you get it. Of course, you may rightfully point out that restaurants are under-staffed and there is a greater population of people who go out to eat versus cooking at home now versus the olden days when I was a kid and yes, this is true, but even in my fast food days, we had minimal payroll and we were still expected to be nice.

It's gotten to the point that when someone is nice, whether they are the person checking you in at the doctor's office or checking you out at the drug store, they stand out because the majority of the population cannot seem to hide the fact that they would rather be anywhere other than where they are and yes, I get that also, but you are being paid to represent a company and not just how you happen to be feeling on a particular day.

Are we no longer teaching people to be nice as they grow up and then we're not training it and expecting it when they become employees? Maybe? The big problem, in my "old man yells at cloud" opinion, is that it's hard to know how to interact with a human being when your main interaction with others for hours a day is via a screen. 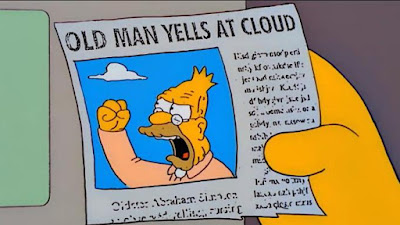