- January 12, 2020
Yesterday's crazy weather came and went and what was left behind is a pretty nice day. 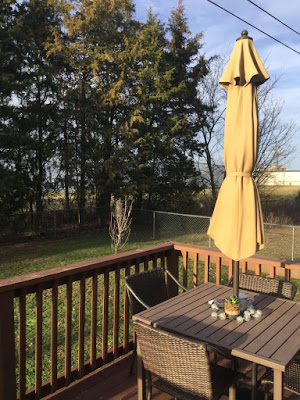 It looks inviting but it's still a tad too damp and a little too chilly to sit out on the deck.

Oh, what a wasted weekend. I've been tired and unmotivated all weekend. Maybe it's because I finished an absolute drudgery of a book that I've been procrastinating getting into another one. I should and could be reading right now. I have a hot cup of coffee right beside me along with my Kindle but I pulled out the Asus Transformer and decided to divert myself with the blog instead.

I'm also tired. After a solid two weeks of getting good sleep, I've had two nights in a row where I've gotten barely any. I think I have been keeping my brain too busy as I've approached bedtime. Youtube videos. Football last night. My mind runs and runs. I woke up this morning completely convinced that it was Monday and I instantly felt the Monday dread but then when I realized that "NO! It's Sunday, Fool!" I couldn't get back to sleep.

I did get a new toy Friday night. My local Walmart was clearing out the latest Legends Flashback for $20. It's a plug and play video game system similar to the Atari Flashback 9 I bought last year. My Atari Flashback 9 is great because it has an SD card slot and plays all Atari 2600 ROMS. The Legends Flashback is great because it also has an SD card slot and it plays all NES and Genesis ROMS and most SNES ones also (most but not all). Plus, I can just swap the same HDMI cable, power cable, and SD card back and forth between the units. Easy peasy.

I guess that's it. Another weekend WASTED. 48 hours gone forever (almost - there are still 8 hours of the weekend to go as I write this but I don't have high hopes of accomplishing a thing in those remaining 8 hours either).