The scanner emerges from storage

- January 07, 2020
Nothing big to report here today aside from a bit on the radio front. I still haven't gotten the shortwave back out since Christmas Day although it is beside the recliner in case I have some time to listen tonight. But I did get my Uniden BC125AT back out of storage. 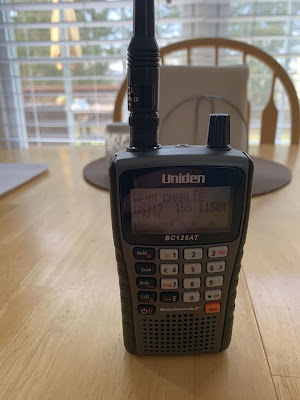 It's been in a tote since the summer because there is not much to listen to on there anymore aside from airplanes (which I get a ton of thanks to the Diamond RH77CA antenna) and county fire/rescue. The city services and just about everything else around here has gone digital.

Some warehouses and other businesses in the area can be picked up on here also but you really have to get out with the radio and make the effort to hear those since they are typically low power and this antenna isn't a miracle worker.

Luckily, this scanner fell under my no-eBay rule which means I no longer get rid of radios and gadgets that I think I don't need. I just store them until the bug bites again and for some reason, today it did.

Years ago, most drive-thru's were analog and I even drove to the Hardee's one day about eight years ago to make a video showing off the capabilities of a Radio Shack scanner I had at the time. This was back before podcasting when I was a tad bit more creative video-wise.