- March 05, 2020
I have been wanting to share a bit of detail about what happened here early Tuesday morning when a tornado passed pretty close to our house and caused terrible damage along a path to the west and east of us that covers 50 straight miles with a bit of a break before another touchdown caused even more damage to our east. Before I go into all that, I wanted to quickly sum up how we fared.

We were very lucky. A lot of our neighbors just a mile down the road were not as fortunate. Also, many businesses here will be closed for quite a while. The recovery process will take some time.

Image one – This is the weather radio that gave us about 20 minutes notice. It went off around 12:35AM, maybe a little earlier than that. The details are a little foggy now! It woke me up and I went to the TV and pulled up our local CBS station, WTVF Channel 5. This radio is a Midland 74-200. I have had it for many years. The modern and easier to program equivalent that is sold in many stores is the Midland WR-120, sometimes called the WR-120B. 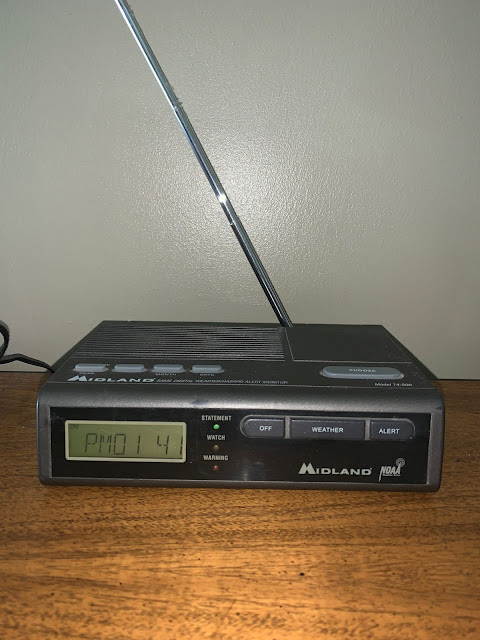 Image two –  These radar images were all pulled off of Twitter and this is the storm cell as it approaches Nashville. On Channel 5, I watch as the storm was coming into Nashville live and with the SkyCams you can see a clearly defined large tornado on the ground. This is when I decide to call my father since he lives northeast of Nashville and I am thinking that this could possibly move toward his house. 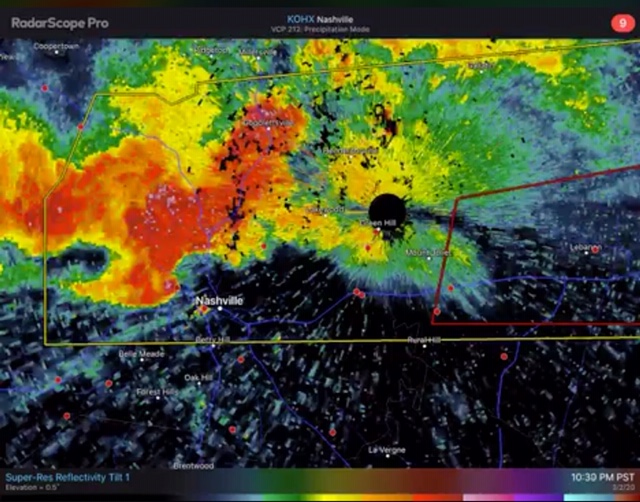 Image three – I think this way because many tornadoes move with at least some southwest to northeast motion. For example, these are the Moore and El Reno tornadoes near Oklahoma City. 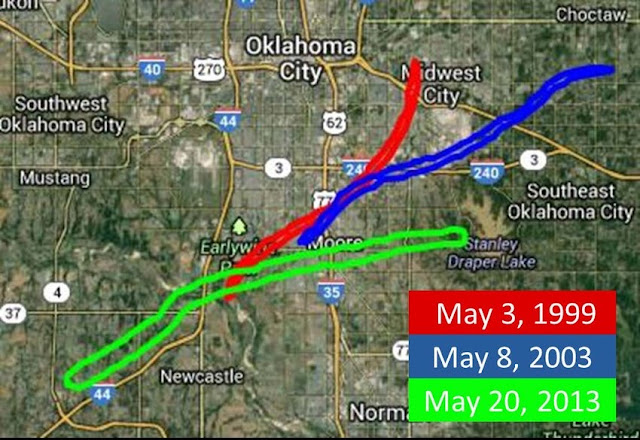 Image four – As I am on the phone with my father and continue to see the radar and the reporting, two things become apparent. First, the storm is tracking nearly due east so my father is going to only get the rain and not the circulation. Second, we have a huge debris ball visible on radar. This tells me that this is going to be really bad for whoever it goes over. 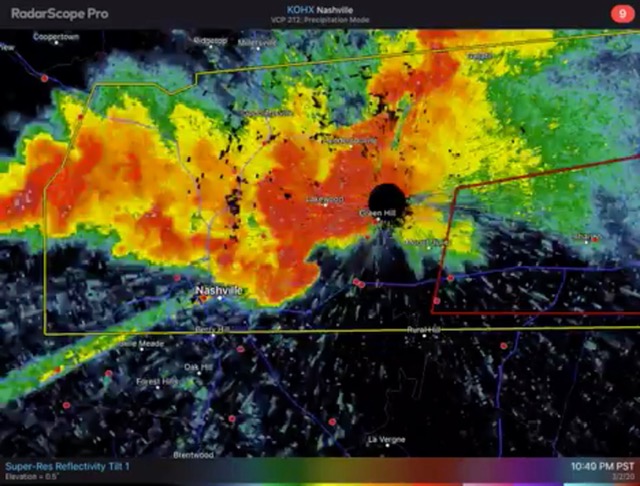 Image five – Channel 5 has different radar views and this is like one of them and it clearly shows the debris ball and wrapped up circulation. This storm is gaining energy and forward motion and will obviously hit the town to my west (Mt. Juliet) and I am thinking possibly go on the north side of where I live (Lebanon) because I am still thinking we will see more northeast motion and I am wrong about that. 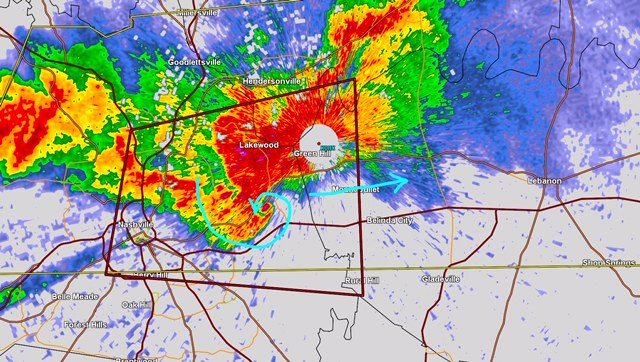 Image six – The advance notice of the weather radio gives me time to share the warnings on our Band Facebook and Instagram just in case anyone is up or has notifications on. The phone emergency alert has still not been activated or at least it has not come to my phone. I had checked my phone right before I went to sleep to make sure notifications for emergency alerts were on. I’ve been up 15 to 20 minutes so far while many people are still asleep. 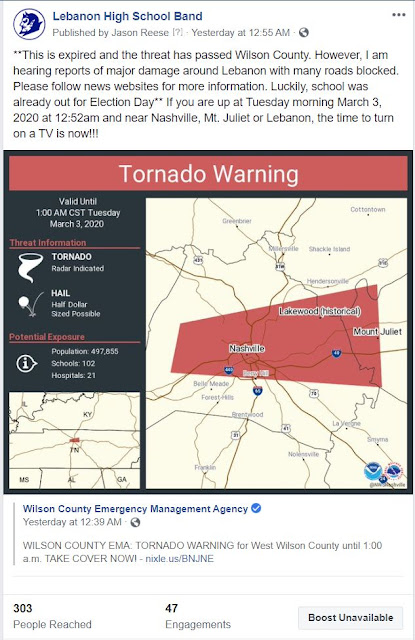 Image seven – As the tornado comes from our west out of Mt. Juliet toward State Highway 109, the circulation seems to be riding I-40 and the debris ball is over I-40. I wake everyone in my house up and get them to the hallway and I call my wife's parents, who live a bit to our north and west, because I realize it will probably hit them if it jogs more to the northeast as it comes into town or us if it stays on the path it is on. And, it’s coming fast at 55 miles per hour. The arrow points into the inflow where the air is being pulled into the circulation so the tornado is in that area. 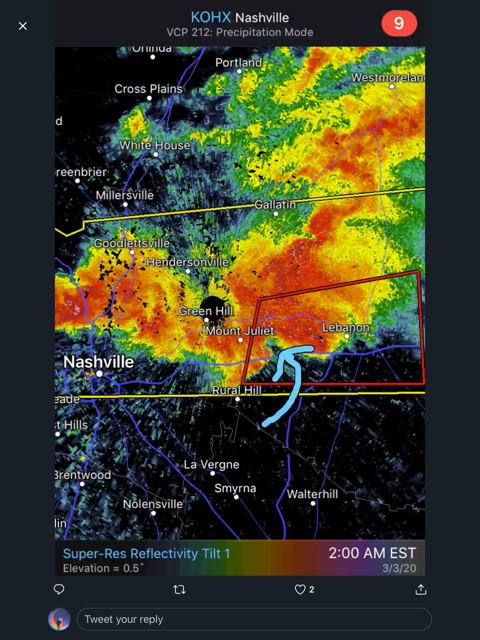 Image eight – I open the back door and the screen so I can listen for it and so I can watch the sky as it is illuminated by lightning and it is not long before I can hear it coming. It sounds far off but it sounds like a leaf blower or even a vacuum on high getting closer and closer and closer.

As it gets closer, I see something very close to this image. This was taken to our west by someone who posted it on Facebook as the storm went through their location. I was not taking pictures. But this is close to what I saw. I can also clearly hear the sound of things being chewed up by the tornado. 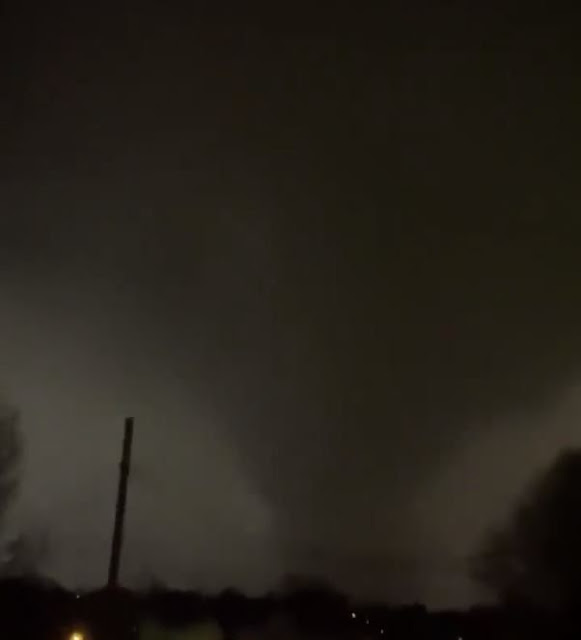 Seeing the size of the tornado in the flashes of lightning, I immediately get my family and dogs out of the hallway and into the smaller, more enclosed bathroom because I know, based on the size of this storm, that the house will be destroyed or at the very least seriously damaged if this is a direct hit.

Why is it important to get to the most interior room of the house? Think of your house as an apple and how we remove the peel and eat toward the core. You take cover in the core because the winds of a tornado and the debris spinning in the circulation will basically peel the structure away from outside to inside and you are hoping that the tornado will move quickly enough that all of the layers of your home won’t be peeled away before it moves away.

Image nine –  How close did we come to a direct hit? Here is the radar as the storm passed our house with an arrow pointing to about where we live. Note that the inflow, which is the air being pulled into the tornado, passed right over our house which matches what I saw from the back door as the trees were pulled by the wind toward the tornado as it passed west to east. The main damage path starts about one mile to the north of our house. It seemed to take about one minute for it to pass our home and then winds died down considerably. 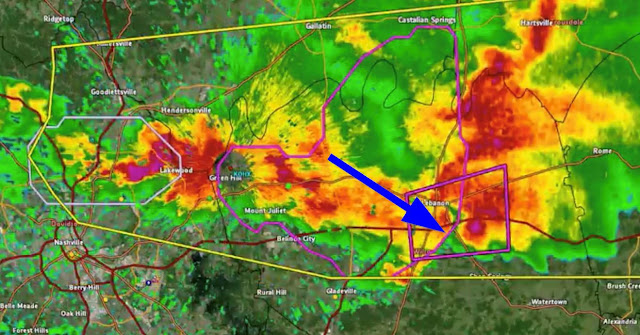 I share all of this just in case someone out there might learn something from what happened to us. The entire event was around 20 minutes start to finish. The storm itself passed in my visible view in probably about 60 seconds. That tells you how fast it was travelling. The more time you have to prepare, the better. That is why I highly recommend a weather radio over just relying on a cell phone.
weblog