Back to the Bridge

- April 28, 2020
We have a local radio station that switched to a format I used to refer to (and still accidentally do sometimes) as Big Band although easy listening would be a better description.

They play a variety that includes The Andrews Sisters, Ella Fitzgerald, Perry Como, Frank Sinatra and others. And somehow, the soundtrack from the 1995 movie "The Bridges of Madison County" also ended up in the rotation. I know this because every so often they will play "Doe Eyes" which is an instrumental written specifically for the movie along with the other songs on the soundtrack.

I've had the soundtrack since it was released because it is full of great songs by Johnny Hartman, Dinah Washington and others. 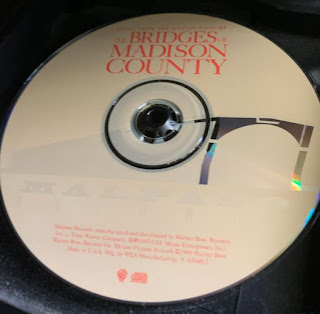 I know I saw the movie at some point in 1995 because I remember parts of it but I haven't seen it since. I also somehow read the book not long after it came out in 1992. I assume my mother bought it and I read it when home for the summer during college.

The book had a very unique look at the time and sold like crazy. It was quite the phenomenon, selling 60 million copies according to Wikipedia. I always see copies of it at the local thrift stores for between a quarter and a dollar but I have never bought a copy to read since I read it that first time almost 30 years ago. 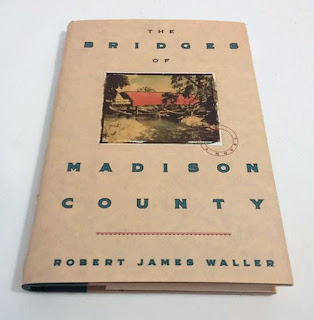 But, I kept hearing songs from the soundtrack so I went out to the local library website to see if there was an eBook I could check out and there was so I read it again last week, finishing on Saturday and I wanted to share a few thoughts and my reason for giving it five stars on Goodreads.

The only part of the book I remembered was when Robert James Waller goes into a very in-depth technical description of Robert Kincaid taking pictures at the Roseman Covered Bridge. In my memory, this section is about twenty pages long and soooo boring. In reality with my much older eyes reading the book, it is only a couple of pages and sort of interesting.

If I have a problem with the book, it's how over the top Waller writes the Kincaid character. Supposedly, it's a tad autobiographical which to me is even worse that this being a purely fictional character and sometimes I just want to call BS, like with these quotes:

He is an elusive figure. At times he seems rather ordinary. At other times ethereal, perhaps even spectral. In his work he was a consummate professional. Yet he saw himself as a peculiar kind of male animal becoming obsolete in a world given over to increasing amounts of organization.

He’d had these drifting kinds of thoughts, a wistful sense of the tragic combined with intense physical and intellectual power, even as a young boy growing up in a small Ohio town.

Francesca said nothing, wondering about a man to whom the difference between a pasture and a meadow seemed important, who got excited about sky color, who wrote a little poetry but not much fiction. Who played the guitar, who earned his living by images and carried his tools in knapsacks. Who seemed like the wind. And moved like it. Came from it, perhaps.

If this is how he sees himself, well, I am not sure what to make of it. In an effort to try to separate the character from the man, I bought an eBook of Waller's book of essays, Old Songs in a New Café and yeah, Waller was sort of a jack-of-all-trades renaissance kind of guy. Did he really come from the wind or just have a huge ego or just wanted to make the Kincaid character a bit of a larger than life version of himself? We have to decide that for ourselves.

But back to the book as a whole, I am now comfortably in the target demographic for Bridges and there is a lot in the book that made me think. The writing feels authentic now including the photography section which was easy for Waller to write since he was an avid photographer in addition to all of his other accomplishments as a musician and educator on top of being a bestselling author.

So, if you can get past a bit of disbelief at times such as wondering aloud at how can these people really exist, you might learn something from this book, something about yourself and the people around you.

I go along with this quote which also appears in the article:

“Once in a very great while,” gushed a critic in the Portland newspaper The Oregonian, “a novel appears that is…so filled with insight and shy sensitivity that we experience an epiphany.”

You just have to be willing to be open to an epiphany and don't discard the book because there are some hard to chew parts.

Finally, Old Songs in a New Café is a great read if you enjoy essays. I was surprised by it. Some of my favorite quotes from the book should be visible here. You might have to be logged into Goodreads. I am not sure.

Here's one quote I really liked. I think it is a good way to end today's post:

Even being a little antisocial helps. A friend of mine is fond of quoting something I said a few years back about my reluctance to attend events of borderline value: “You have fewer people at your funeral, but you get more reading time.” There are krakens out there gobbling your life, and it’s crucial that they be spotted and nullified.