Big brother is watching you drive around

- Thursday, April 02, 2020
The governor of our state issued a statewide stay at home order today while we have been one in our county for almost two weeks as have most of the counties around us.

He said it is because more people are getting out and driving around and to prove this he had data from our Department of Transportation but also from a company named Unacast which is anonymously (supposedly) tracking our movements by our cell phones. That sounds a bit creepy to me.

But, this is how our governor does his job. He's blaming all of us for lagging behind other states and most of our own cities and counties in doing what he should have done in the first place. He takes none of the blame himself.

Even the chart they shared to prove his numbers doesn't prove much of anything. 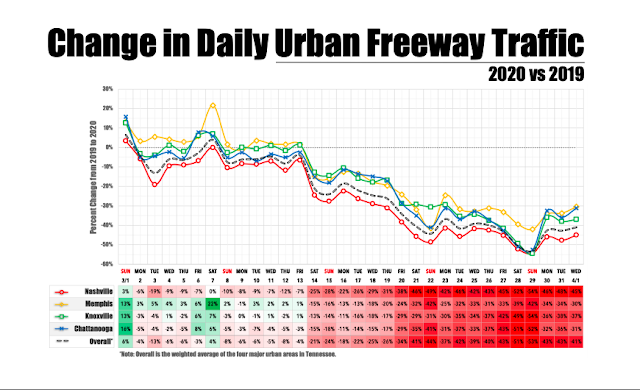 Traffic is still at least 30% down year to year and the uptick he blames this on is because people went back to work on Monday at the places he himself deemed essential. And I am sure some people are out looking for work since we have lost thousands and thousands of jobs since all of this started. It's hard to stay at home if you have no money.

What a load of crap.

I went out to the store today for a few things and hardly anyone was out at all which is the way it has looked here for weeks. Every day reminds me of travelling on Thanksgiving Day or Christmas. It's eerie how few people are out.

The governor just doesn't want to admit the truth - he was slow to react and national pressure forced him to give in.
weblog