I almost didn’t write this one today. I am getting it in starting at 9:15pm so plenty of time, right? Unfortunately, I also have absolutely no topic. I am, as often happens with the podcast, winging it. I think if I start typing, the flow will kick in and the words will just come out. We’ll see how that turns out. I could have started on this an hour ago but Don Giller posted the Late Night with David Letterman 5th Anniversary Special on YouTube so I had to watch some of that, of course. Sure, I saw it when it came on way back in 1987 and I’m sure I taped it on the VCR and watched it a few times afterward but I haven’t seen it in a long, long time and it sort of sucked me in.

And a bit earlier than that, I watched three episodes of Emergency! in a row. Season 1, episodes 1-3. They were such a big change from the end of the series which, starting with season 6, was really phoning it in. In episodes 1 and 2 of the series, we were shown a glimpse of their personal lives and even got to see Roy’s wife. Although she was referred to many times in the series, she was never shown again and I don’t know why the character’s personal lives weren’t a bigger part of the show. It would have broken the monotony of one rescue after another and given the characters a bit of depth but I assume Jack Webb was against it. It’s a shame because season 6 is full of episodes that are a lot like other episodes just slightly retooled.

In the made for tv movies, counted as season 7, it appears that they were trying to recreate Emergency! in San Francisco with more visibility of the character’s private lives but it didn’t go anywhere and in 1979, the show was over for good and the two main stars never did anything as huge again which is a shame. They both seemed to have a ton of potential to move on to other shows.

But enough about Emergency! I am almost done with my complete rewatch and then it will be time to take naps in the place of when I typically watched episodes.

No naps today. I packed up the car with all of my tools this morning and picked up my father-in-law and his tools and then drove to my father’s house to tackle his toilet. We ended up only needing the fill valve, which I replaced probably 15 or so years ago and I didn’t need any of the tools, a Buick trunk full, that we brought. Total cost of the job - $8 plus my priceless time and $1.96 a gallon gas. We went to a local seafood restaurant for a victory lunch and returned to Armpit.

When I got home, the last sticker I ordered for my laptop had arrived and it was time to watch Emergency! and arrange and then place the stickers to this laptop, the writing laptop. Yay! 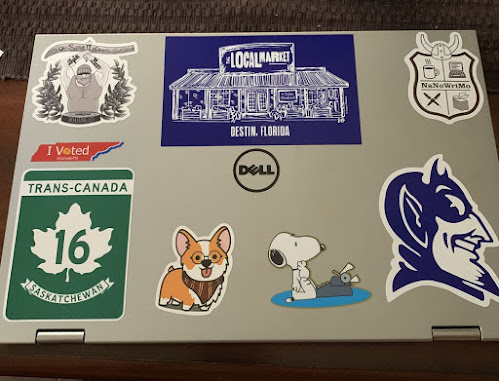 That’s when I started watching three episodes of Emergency! and put off mowing yet again because it was too hot and I am too lazy. I think I need a full night of sleep tonight so I might self-medicate with a Benadryl right before bedtime and enjoy the pink pill coma for the night. That would be nice. I am nodding off just thinking about it.

In other news, coronavirus is closing in on me. I went into a bit of detail in our private Discord. I can’t go into any here in public other than to say it hasn’t closed in on me completely yet but the circle is shrinking and it’s getting closer and closer.

As I write this, I am listening to one of the streaming You Tube channels I found, https://www.youtube.com/watch?v=fEvM-OUbaKs . I don’t know how channels like this are legal or how they make money (Nothing is free!) but I enjoy this channel especially. Other streaming services like Pandora and Spotify have way too many ads. I know – Nothing is free! They have to have ads. True, but do they have to be after every other song? I guess that’s how radio works so maybe I just answered by own question.

It’s going to be hot again tomorrow but maybe just an iota less humid and I am going to have to mow because it’s almost at the height where I cannot put it off any longer unless I want the mower to get stuck. And, it just looks bad. We don’t want to be the bad people who never mow of the neighborhood. They will talk about it on the private neighborhood Facebook group I refuse to join and on NextDoor, the gossip site for nosy neighbors that I refuse to sign up for. Talk about me all you want, neighbors! I don’t care! I have enough social media as it is. I have no room for any more.

I guess that’s about it. I got in one of the library holds I thought would take weeks to show up so I charged up the Kindle and have read only about 10 pages so I need to get going on that tomorrow. I also haven’t recorded the podcast this week so I would like to do that tomorrow also. By the time I think about doing it, it is so hot outside that I can’t stand sitting out on the deck so maybe I will wake up at 3AM tonight and get it done. I guess that won’t happen if I am in the pink pill Benadryl coma. Hmmm. Decisions, decisions….