July Write-O-Rama 2: The dream is always the same

Well, it’s not exactly the same but it does have to do with airports, more specifically getting to the airport and even the mundane detail of getting packed for the airport. Once upon a time, before the technological advances we enjoy today existed, I travelled a great deal for work and most of that travel was by plane. At first, I didn’t mind it. By the end, it had become exhausting. I haven’t travelled for work in several years and I will most likely never be on the road every other week like I was way back when but the airports keep haunting my dreams for some reason. I guess this is a trade-off of the happy pills allowing me to sleep better at night. Now I seem to have more vivid dreams and the content of those dreams sticks with me into the next day sometimes.

Last night’s weird-o-rama started with me packing for the airport. It was a light trip. Three days. Luggage opened up on the floor for some reason. I was leaving some place I had never seen before which seemed to be the destination of a trip itself. I would pack up and go out the door and the dream would not contain the scene in which I went to the airport (I have had dreams that did include that boring detail also so this was a nice reprieve). Then I am at the airport, meeting various co-workers and going through what seemed to me like the real time drudgery of checking in, going through security, trying to find the correct gate, etc. and once I boarded the plane, POOF!, the dream reboots and I am back at the unknown location about to start packing for the trip again but this time there is less time and more possibility of forgetting something I really need.

This weirdness seems to repeat over and over, all night. Sometimes I am not feeling well and I cancel the trip. Sometimes I don’t make it to the airport on time. One time I showed up wearing a jacket but no shirt underneath. The final version of the dream I remember involved me stopping at a bookstore on the way to the airport which ended up being an exact replica of the bookstore where my mother worked in the late 70’s, early 80’s. It was a modern replica with modern items so no, my mother was not there as she is not here today. One detail I remember is half of the magazine rack was empty and I asked about this and was told that magazines were very hard to keep in stock because everyone was buying them up during coronavirus.

I wonder if the bookstore popping up has something to do with my mother’s records. I finally, after over four years, reached out to a collector this week about my mother’s records that have been sitting here for four years collecting dust. I decided a while back that it was pointless for them to sit around unplayed and I should let go of them but I have done nothing about it. I called and made inquiries with some dealers a couple of years back but didn’t follow through on anything. So, they have sat and have been moved room to room and around rooms at holidays and it seems silly to let them continue to be here being basically ignored. I even bought a new turntable at the start of 2017 thinking I would play them a lot like I did when I was growing up but I discovered that they really just make me sad so I gave up on that after a couple of months and the records and the turntable do nothing more than collect dust. 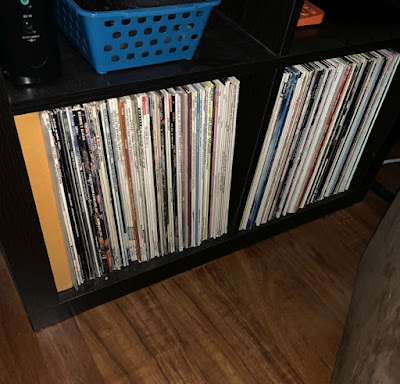 Still, part of me feels almost nervous about the prospect of letting go of them and the idea of letting them go weighs on me each time it becomes a possibility. It might even be the cause of repetitive airport-related dreams. I feel like it is the mentally healthy thing to do but it is one more piece of my mother that is slipping away although more of her things remain here. I have a drawer of her belongings in our bedroom and boxes containing stuff in the attic that need to be sorted out.

At the end, I know that people who have left us are preserved by memories and not tons of their items (a few are ok and I am keeping what means the most to me) but it still feels sad and symbolic to let go of the records even though I know it is what is right for me and I have discussed this with the kids and my wife and all of them feel like it is best to let these records go on to a place where they will be appreciated and played free of the memories that prevent me from playing them.